A propaganda film produced by the French Communist Party (PCF) for the campaign for the May 1936 elections – which brought the Popular Front to power – “La vie est à nous”, by Jean Renoir, was shot by a team of militant filmmakers and technicians. END_OF_DOCUMENT_TOKEN_TO_BE_REPLACED

Synopsis:
Lucien is a young man whose ambition is to become a famous explorer, against the wishes of his middle-class parents who hope he might settle for a more conventional career. After a row with his father, he leaves home and meets up with his friends, a wild bunch of aspiring young actors, writers and film directors. The latter have offered to join Lucien on his expedition – if he can get the transportation. Lucien is so preoccupied with planning his expedition that he does not notice when his girlfriend Christine is taken from him by the theatre director she is working for. END_OF_DOCUMENT_TOKEN_TO_BE_REPLACED

Quote:
Originally Goupi Mains Rouges, this was the first new French feature film to be shown in the US since the end of WW2-though “new” was a relative term, inasmuch as the film was completed in 1943. The scene is a remote, rustic inn, managed by a scruffy family of peasants known as the Goupis. Practicing their own special brand of larceny, the Goupis fancy themselves as Runyonesque rogues, going so far as to bestow colorful nicknames upon themselves. The official head of the band is “Red Hands”, played by Fernand Ledoux, but even he is answerable to the Goupis’ patriarch, a 106-year-old named “The Emperor” (Maurice Schulz). END_OF_DOCUMENT_TOKEN_TO_BE_REPLACED 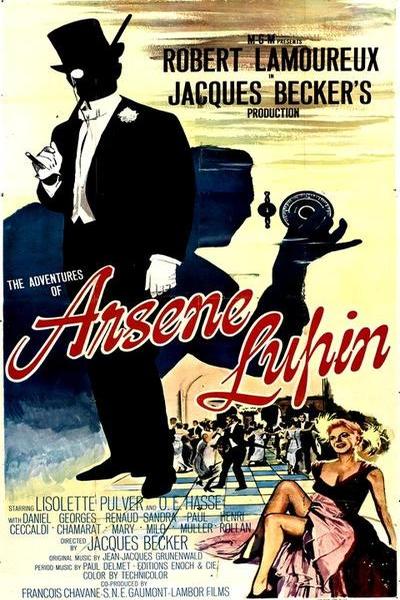 Synopsis
The great gentleman thief, Arsène Lupin, engages in a series of daring schemes to deprive his wealthy countrymen of rare jewels and priceless paintings. His activities arouse the interest of Kaiser William II of Germany who arranges for Lupin to be kidnapped and brought to his castle. The Kaiser offers Lupin a challenge: to steal a jewel of great value from a secret hiding place. Should Lupin accept the wager? END_OF_DOCUMENT_TOKEN_TO_BE_REPLACED