Quote:
An artistic, shocking love story that disturbed audiences and confused almost all critics that couldn’t see beyond the disturbing images. A mute girl maintains a fishing resort where people stay in floating mini-houses while fishing, resting and using prostitutes. She services them in any way she can in order to make ends meet but the crude clientele annoy her often, forcing her at times to take revenge. Along comes a brooding, suicidal client with a dark past. Will they connect through their pain or treat each other like animals? Full of beautiful scenery, poetically breathtaking symbolism, animalistic sex and behaviour, and notorious for its faint-inducing scenes involving fish-hooks. END_OF_DOCUMENT_TOKEN_TO_BE_REPLACED

Synopsis:
Adopted by a nomadic pansori singer, Dong Ho (Cho Jae Hyun) and Song Hwa (Oh Jung Hae) grow up as brother and sister, bounded by a deep unspoken affection. Their father trains them strictly, and Song Hwa’s love and talent for pansori becomes both her blessing and her burden. Young and brash, Dong Ho tries to keep pace as a traditional drum player, but eventually leaves the family in search of a better life. Though in the ensuing years he encounters news places and new people, he can never forget his love for Song Hwa. Together and apart, reunion and separation, the two keep moving in different directions while restlessly chasing each other’s shadows. Dong Ho spends a lifetime trying to find a place he belongs, a way to Song Hwa’s heart. END_OF_DOCUMENT_TOKEN_TO_BE_REPLACED

I often quote Kim Ki-Duk as my favourite director of all time, partly because of his prolific output (I’m glad he numbers his films, I was losing count!) and his consistently emotional style. While I absolutely adore the “new-wave” Kim Ki-Duk (3-Iron, Spring, Summer, Autumn, Winter…And Spring, The Bow), I also thoroughly enjoy his earlier, grittier films (The Isle, Address Unknown). This film, his debut, is possibly the best and grittiest of the early films. In a setting that stands somewhere between urban and rural, and filled with Kim Ki-Duk’s beloved water motif, we see three misfits (a boy, the title character Crocodile and an elderly man) inexplicably living together on a platform under a bridge. END_OF_DOCUMENT_TOKEN_TO_BE_REPLACED 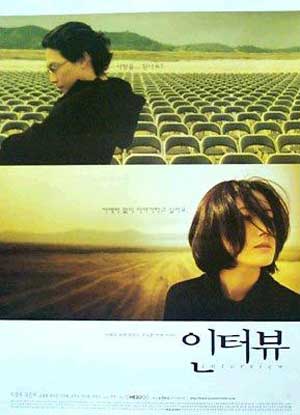 Interview follows a film crew while they sort through interviews to make a movie, which may or may not be a documentary, about destined love. In the process, the director within this film, Eun-suk (Lee Jung-jae) seems to be destined to fall in love with one of the interviewees, Young-hee (Shim Eun-ha). We learn through a purposely disjointed narrative that this may not have been when Eun-suk met Young-hee for the first time. Added to this temporal disorientation is further doubt in the events unfolding since Young-hee is as unreliable in her interview as Eun-suk is silent about his past. END_OF_DOCUMENT_TOKEN_TO_BE_REPLACED

IMDB:
Two Korean ex-pats meet in Paris by chance encounter. One a petty thief and wannabe artist/painter (Chong-Hae), the other a tough guy (Hong San). Hong San saves Chong-Hae from a gang of thugs and the two become friends. Seizing an opportunity, Chong-Hae and Hong San perform martial arts stunts on the streets for money. A French mobster spots them and recruits the duo as hit men. While in Paris Chong-Hae falls in love with a statue-performer and Hong San yearns for the affections of a local peep-show stripper. After much backstabbing and being caught-up in murder; the duo find themselves at war with their mobster recruiters and each other. Written by Alex L END_OF_DOCUMENT_TOKEN_TO_BE_REPLACED