SYNOPSIS:
Clay Spencer is a hard-working man who loves his wife and large family. He is respected by his neighbors and always ready to give them a helping hand. Although not a churchgoer, he even helps a newly arrived local minister regain his flock after he and Clay get into a bit of trouble. If he has one dream in life it’s to build his wife Olivia a beautiful house on a piece of land he inherited on Spencer’s mountain. When his eldest son, Clayboy, graduates at the top of his high school class and has the opportunity to go to college, Clay has only one option left to him. END_OF_DOCUMENT_TOKEN_TO_BE_REPLACED

Synopsis:
A family in route to New Guinea is shipwrecked on a deserted tropical island. They are forced to remain on the island because of the damage to the ship and the pirates that are roaming the islands. They create a home on the island (centering around a huge tree house) and explore the island and its wildlife. Plenty of adventure ensues as the family deals with issues of survival and pirates, and the brothers must learn how to live on the island with an uncertain future. END_OF_DOCUMENT_TOKEN_TO_BE_REPLACED 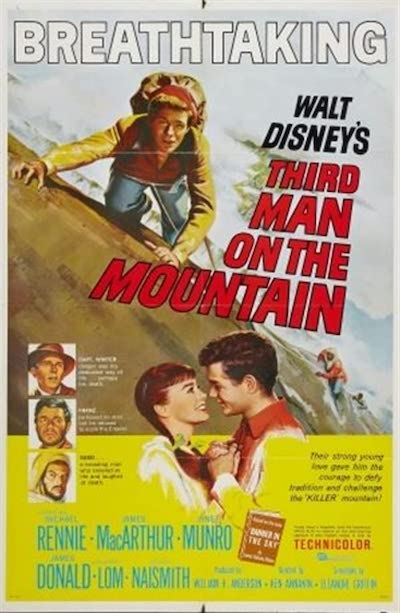 Quote:
A young man in 19th century Switzerland whose father was killed trying to climb the Citadel (which is what the Matterhorn is called here) wants to become a mountaineer himself, and of course climb to the top of the Citadel, which no man has done. His mother strictly forbids it, and his uncle downright nasty to him whenever the subject comes up. Persistent fellow that he is, the boy hooks up with an English mountain climber, then coaxes his uncle to take him along on a climb, makes an ass of himself, then has a go at it again. The boy doesn’t really have the maturity for the task, but persists, and in time he grows up, almost in spite of himself. END_OF_DOCUMENT_TOKEN_TO_BE_REPLACED