Quote:
Jacques Audiard made his directorial debut in a spectacular fashion with Regarde les hommes tomber, one of the most visually striking and disturbing French thrillers of the 1990s. The son of the acclaimed French screenwriter Michel Audiard, he had scripted several films (going back to the mid-1970s) before he gravitated to the role of director and pretty well redefined the French film noir with this and his subsequent thriller offerings – Sur mes lèvres (2001), De battre mon coeur s’est arrêté (2005) and, of course, the stunning Un prophète (2009). Those aspects which most characterise Audiard’s distinctive brand of cinema – the nihilistic bleakness, the fragmented narrative, the assortment of fragile outcasts living on the abyss – are present in his first film, an idiosyncratic study in solitude and friendship. END_OF_DOCUMENT_TOKEN_TO_BE_REPLACED

Synopsis:
Rare is the film in movie-history that can announce the entire movement of it’s ‘plot’ with its title alone. But Pialat’s second feature, Nous Ne Viellirons Pas Ensemble does exactly that, encapsulating all the turmoil, and the final end-point, of a couple who among themselves once made a commitment – and living together will come to make another one yet. Jean (Jeane Yanne, of Godard’s Weekend) and Catherine (Marlene Jobert, of Godard’s Masculin Feminin) are the couple whose every move charts an advancement deeper into an emotional warzone. Theirs is the classic and the tragic case of an emotional abuse centered around a perplexing, but powerful, interdependency. END_OF_DOCUMENT_TOKEN_TO_BE_REPLACED

SYNOPSIS
The master of the French New Wave indicts consumerism and elaborates on his personal vision of Hell with this raucous, biting satire. A nasty, scheming bourgeois Parisian couple embarks on a journey through the countryside to her father’s house, where they pray for his death and a subsequent inheritance. Their trip is at first delayed, and later it is distracted by several outrageous events and characters including an apocalyptic traffic jam, a group of fictional philosophers, a couple of violent carjackers, and eventually, a gross display of cannibalism. By the time the film concludes, their seemingly simple journey has deteriorated into a freewheeling philosophical diatribe that leaves no topic unscathed. With Week End, Jean-Luc Godard reaches an impressive plateau of film originality, incorporating inter-titles, extended tracking shots, and music to add an entirely new grammar to film language. The result is a deeply challenging work that will most certainly invigorate some viewers just as much as it will as frustrate others. Standout highlights include a jarring, sexually graphic opening monologue shot with a roaming camera and blaring musical accompaniment, and the infamous traffic jam scene, where an endless parade of cars sit bumper to bumper amidst burning cars, picnics, and honking horns. The work of a true artist and pioneer, Godard’s Week End is a landmark film that hasn’t aged or lessened in impact over time.
(Taken from Rotten Tomatoes) END_OF_DOCUMENT_TOKEN_TO_BE_REPLACED 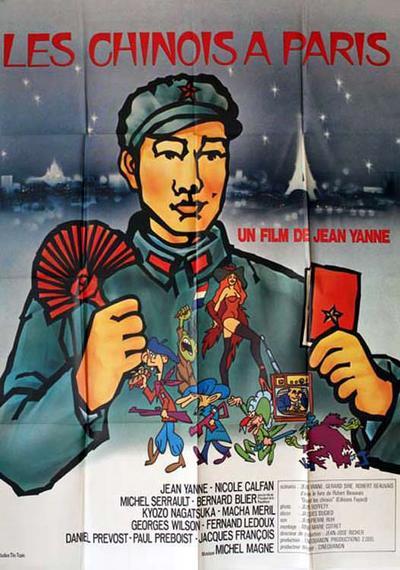 Synopsis
The Maoist Chinese, by some miracle, have occupied Paris (and France) overnight. The patience of these stern, work-oriented and quite puritanical communists is finally completely worn down by the quarrelsome, cynical and decadent French, who cannot cooperate properly even when they are willing… END_OF_DOCUMENT_TOKEN_TO_BE_REPLACED