From IMDB
A brave unicorn and a magician fight an evil king who is obsessed with attempting to capture the world’s unicorns. END_OF_DOCUMENT_TOKEN_TO_BE_REPLACED

Synopsis:
Nineteen years after President Timothy Kegan (John Warner) was assassinated, his brother Nick (Jeff Bridges) discovers a dying man claiming to have been the gunman. While trying to avoid his wealthy and domineering father’s attempts to control his actions, Nick follows the clues that have been handed to him. As he progresses, it becomes increasingly difficult to discern the real trails from the dead ends, and increasing dangerous as unknown parties try to stop Nick from uncovering the truth. END_OF_DOCUMENT_TOKEN_TO_BE_REPLACED

Berkeley Art Museum / Pacific Film Archive writes:
Hailed as John Huston’s “comeback” film in 1972, Fat City is a film that deserves to come back more often. Based on a novel by Leonard Gardner, who also wrote the screenplay, and photographed by the excellent Conrad Hall (In Cold Blood), it is a portrait of the seedy, small-time boxing milieu of Stockton, CA. (“Huston is in his element here,” Andrew Sarris wrote, “simply because his realistic affectations have always been merely a cover and an alibi for his romantic affection for the compulsive losers of this world.”) The losers in Fat City are two prizefighters (Stacy Keach and Jeff Bridges), a sherry-drinking barfly (Susan Tyrrell), her jailed and released black lover (Curtis Cokes), and assorted fight managers, boxers, lettuce pickers, bartenders and countermen… END_OF_DOCUMENT_TOKEN_TO_BE_REPLACED

Plot Synopsis [AMG]As much an eccentric character study as a road movie, Michael Cimino’s directorial debut follows the adventures of a quartet of misfits in their life of crime. Retired thief Thunderbolt (Clint Eastwood) and sweet drifter Lightfoot (Jeff Bridges) meet cute when Thunderbolt jumps into Lightfoot’s stolen car to escape a gunman. The pair embarks on an oddball journey to get Thunderbolt’s loot from an old robbery before his former associates, the sadistic Red (George Kennedy) and cretinous Goody (Geoffrey Lewis), get to it first, but all four are too late; the one-room schoolhouse hiding place has apparently vanished. So instead, the four play house and work legit jobs while they plot to rob the same place Thunderbolt and Red hit before. END_OF_DOCUMENT_TOKEN_TO_BE_REPLACED 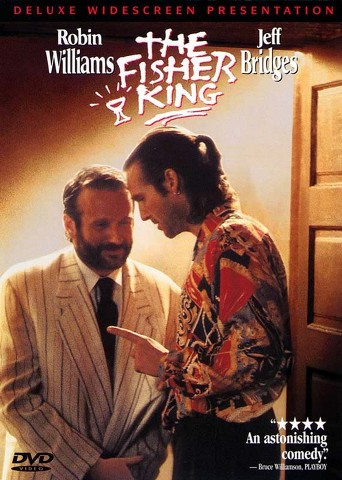 A radio DJ, suicidally despondent because of a horrible mistake he made, finds redemption in helping a deranged homeless man who was a victim of it.
A Modern Day Tale About The Search For Love, Sanity, Ethel Merman And The Holy Grail.
A good, old-fashioned story of guilt, poverty, love, madness and free video club membership.
Some called him a hero. Some called him the most dangerous man in America END_OF_DOCUMENT_TOKEN_TO_BE_REPLACED 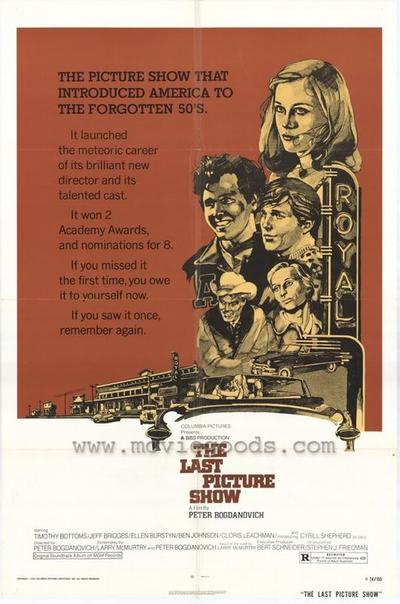 Quote:
In tiny Anarene, Texas, in the lull between World War Two and the Korean Conflict, Sonny and Duane are best friends. Enduring that awkward period of life between boyhood and manhood, the two pass their time the best way they know how — with the movie house, basketball, and girls. Jacey is Duane’s steady, wanted by every boy in school, and she knows it. Her daddy is rich and her mom is good looking and loose. It’s the general consensus that whoever wins Jacey’s heart will be set for life. But Anarene is dying a quiet death as folks head for the big cities to make their livings and raise their kids. The boys are torn between a future somewhere out there beyond the borders of town or making do with their inheritance of a run-down pool hall and a decrepit movie house — the legacy of their friend and mentor, Sam the Lion. As high school graduation approaches, they learn some difficult lessons about love, loneliness, and jealousy. Then folks stop attending the second-run features at the movie house and the time comes for the last picture show. With the closure of the movie house, the boys feel that a stage of their lives is closing. They stand uneasily on the threshold of the rest of their lives. (The movie was adapted from the novel by Larry McMurtry). END_OF_DOCUMENT_TOKEN_TO_BE_REPLACED