Quote:
Emily Crane is fired after refusing to give names to a 1951 House Un-American Activities Committee, and takes a part-time job as companion to an old lady. One day her attention is drawn to a noisy argument being conducted largely in German in a neighbouring house, the more so since one of those involved is her main senator prosecutor. Starting to look into things, she gradually enlists the help of FBI officer Cochran who was initially detailed to check her out. Just as well when things turn nasty. END_OF_DOCUMENT_TOKEN_TO_BE_REPLACED

From Allmovie:
A wildly inventive and entertaining comic nightmare from former Roger Corman prodigy Jonathan Demme (The Silence of the Lambs), this screwball odyssey is a ride to remember. Jeff Daniels plays clean-cut New York bond trader Charlie Driggs, who accepts a ride home from a strange but attractive lower-class woman named Lulu (Melanie Griffith). The sexy Louise Brooks lookalike doesn’t take him home, but shanghais him for a bizarre roadtrip to Virginia that includes kinky bondage sex, destruction of property, and robbery. Things get stranger when Lulu tells Charlie that her real name is Audrey and takes him home to meet her mother, asking him to pose as her husband. END_OF_DOCUMENT_TOKEN_TO_BE_REPLACED 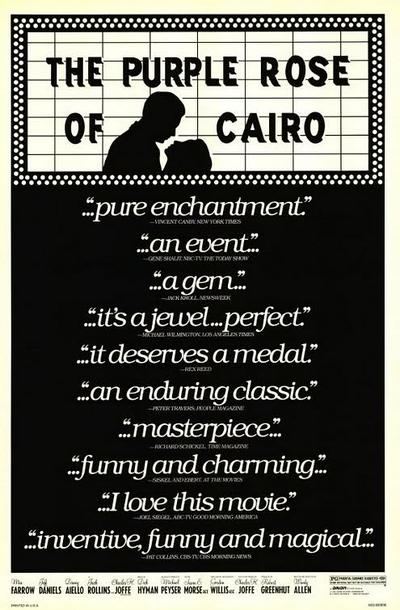 Woody Allen blurs the the boundaries between the real and unreal in this unique comic fantasy. The scene is a small town in the mid-1930s. Trapped in a dead-end job and an abusive marriage, Cecelia (Mia Farrow) regularly seeks refuge in the local movie house. She becomes so enraptured by the latest attraction, an RKO screwball comedy called The Purple Rose of Cairo, that she returns to the theatre day after day. During one of these visits, the film’s main character Tom Baxter (Jeff Daniels), pauses in his dialogue, turns towards the audience, and says to Cecelia, “My God, how you must love this picture.” Then he climbs out of the movie, much to the consternation of the rest of the audience and the other characters on screen. Liberated from his customary black-and-white environs, he accompanies Cecelia on a tour of the town, eventually falling in love with her. Meanwhile, the other Purple Rose characters, unable to proceed with the film, carry on a discussion with themselves. Desperately, the RKO executives seek out Gil Shepherd, the actor who played the hero of Purple Rose. Shepherd (also played by Daniels), is sent to Cecelia’s hometown to see if he can repair the damage. END_OF_DOCUMENT_TOKEN_TO_BE_REPLACED