A moment of personal tragedy prompts concert violinist Paul Boray (John Garfield) to re-evaluate his life. He recalls happier times when, as a small boy, his mother gave him a violin for his birthday. After years of dedicated study, Paul becomes an accomplished violinist, but he finds it impossible to work so he can pay his way. One day, his pianist friend Sid Jeffers (Oscar Levant) takes him along to a party hosted by the wealthy socialite Helen Wright (Joan Crawford). The latter is trapped in a loveless marriage with an older man and finds the headstrong young violin player a tempting proposition. She decides to act as Paul’s patron, financing his debut concert and providing him with a manager. Through Helen’s money and contacts, Paul soon becomes an established musician, and he shows his gratitutde in just the way Helen hoped he might. But just when Helen thinks she has won her man, she realizes that she will never be able to compete with his one true love: his music… END_OF_DOCUMENT_TOKEN_TO_BE_REPLACED

Synopsis:
Passengers on an ocean liner can’t recall how they got on board or where they are going yet, oddly enough, it soon becomes apparent that they all have something in common. END_OF_DOCUMENT_TOKEN_TO_BE_REPLACED

G.I. Nick Blake, a never charged con man in his pre-military life, has just received an honorable discharge from the army on medical reasons. Rather than return to his old life, he plans to settle down in New York, his hometown, with his girlfriend Toni Blackburn and the small cache of money he amassed prior to the war: $50,000. When that plan does not pan out, he decides to head to Los Angeles with his con man friend Al Doyle and live it up until he decides on a more permanent course for his life. He is informed by Pop Gruber, an aging mentor doing solely penny-ante street cons now in L.A., of a potential big mark. Doc Ganson, a former con associate, found the mark, lonely widow Gladys Halvorsen worth $2 million, but does not have either the bankroll or the charms to carry out the con on Gladys himself. END_OF_DOCUMENT_TOKEN_TO_BE_REPLACED

Synopsis:
Humphrey van Weyden, a writer, and fugitives Ruth Webster and George Leach have been given refuge aboard the sealer “Ghost,” captained by the cruel Wolf Larsen. The crew mutinies against Larsen’s many crimes, and though van Weyden, Ruth, and George try to escape Larsen’s clutches, they find themselves drawn inexorably back to him as the “Ghost” sails toward disaster. END_OF_DOCUMENT_TOKEN_TO_BE_REPLACED

Synopsis:
Troubled youths Joe and Nick Lorenzo grow into very different men: Joe a small-time hoodlum and Nick an honored college graduate. When Nick falls for Joe’s girl Laurie, trouble erupts between the two men and also with the gang that has it in for Joe. END_OF_DOCUMENT_TOKEN_TO_BE_REPLACED 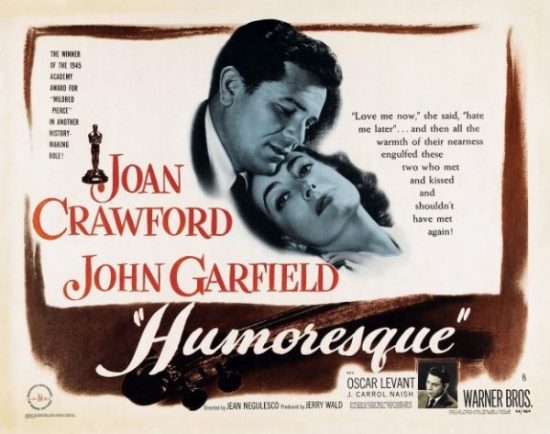 Plot Synopsis [AMG]
Fannie Hurst’s novel Humoresque is the lachrymose tale of a famed Jewish-American violinist who forgets all about his friends and family in his rise to fame. Screenwriters Clifford Odets and Zachary Gold refashioned this timeworn material into a first-class, big-budget soap opera, completely dominated by the high-octane talents of Joan Crawford and John Garfield. A gifted musician, Garfield rises from the slums to the upper echelons of society, thanks to the patronage of wealthy, alcoholic Crawford. Virtually ignored by her husband Paul Cavanaugh, Crawford adopts Garfield as her lover as well as her protégé. He is only mildly offended by the setup; she, on the other hand, becomes jealous and possessive. It is not a woman who comes between Crawford and Garfield: it the intensity of his talent, not to mention the spectre of the great composers whose works he interprets so brilliantly. Garfield’s virago of a mother (Ruth Nelson) feeds upon Crawford’s jealousy, planting the seeds of guilt for (allegedly) holding her son back. Finally, Crawford is driven to suicide; in a brilliantly directed and photographed sequence, she walks into the ocean, as Garfield is heard over the radio, playing “Liebstod” from Wagner’s Tristan und Isolde with full orchestral accompaniment. The ultrastylish suffering of Joan Crawford and the street-punk insouciance of John Garfield (who looks like a “Dead End Kid” even while wearing a tux) is counterpointed by the phlegmatic comedy relief of Oscar Levant. Together with Mildred Pierce, Humoresque is the best of the Warner Bros. Joan Crawford vehicles. END_OF_DOCUMENT_TOKEN_TO_BE_REPLACED