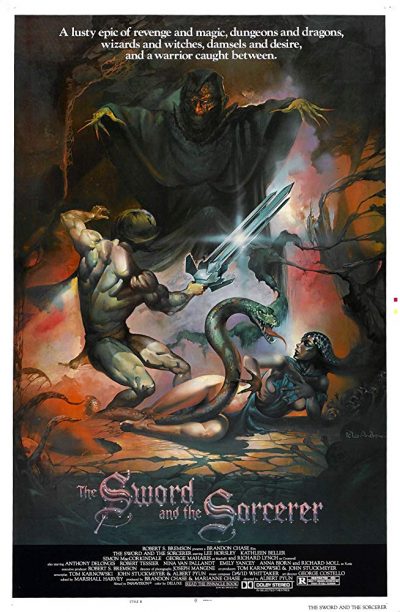 Alan Mount (IMDB) said this:
“This movie which came out at around the same time as “CONAN THE BARBARIAN” is the better film. It is a rip-roaring fantasy adventure which has elements of Harryhausen’s “SINBAD” and “JASON” movies,the graphic violence of “CONAN” and a precursor of the humour and dialogue which would permeate T.V’s “HERCULES” and “XENA”. Lee Horsley in a career best role plays the warrior hero Talon to perfection and it is a shame that the promised sequel never appeared.The action and fantasy elements are strongly brought to the fore by a superb and rousingly heroic score by David Whittaker which stands alone as a great piece of music in its own right.Director Albert Pyun has never bettered his work here and like everyone involved gives his all to fashion a brilliant slice of ‘B’ movie entertainment guaranteed to set the pulses racing of anyone,old or young,who ever thrilled to the sight and sounds of swords clashing.Whenever there are kingdoms to be saved,battles to be won and women to love let’s hope that heroes like Talon will re-emerge on our screens to fight the good fight.All in all,”THE SWORD AND THE SORCERER” is a thoroughly enjoyable movie….9 out of 10.” END_OF_DOCUMENT_TOKEN_TO_BE_REPLACED