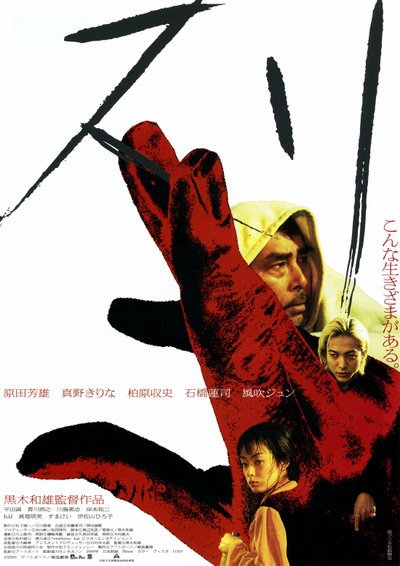 Quote:
Kaido is a professional pickpocket who works the Tokyo subway with his young foster-daughter, Rei: She lets herself be groped while Kaido relieves the groper of his wallet. More often than not they’re observed by a middle-aged cop, who generally lets Kaido go free. Rei is unsettled when Kaido takes on a young street punk, Kazuki, as an apprentice — with instructions to make Kaido stop drinking. Kazuki, however, would like to go into business with Rei. END_OF_DOCUMENT_TOKEN_TO_BE_REPLACED

If there were awards for great titles then Bullet Ballet would surely be up for a gong or two. At once suggesting both violence and elegance, it sounds like the perfect Hong Kong era John Woo film, an all-action but balletic explosion of slow-motion gunplay that became the director’s trademark. But this isn’t John Woo, this is Shinya Tsukamoto, a director whose deeply personal style is a million miles from Woo’s slickly filmed action works. Tsukamoto’s concerns are far more localised, to the city in which he lives, to his neighbourhood, to his own body, and his cinematic style is far edgier and more dangerous. Which is not to knock Woo in any way, but nowadays when Woo is making the vacuous Paycheck, Tsukamoto is making the extraordinary A Snake of June. He is one of those rare directors who has never sold out and never compromised his vision. Tsukamoto is the very personification of a great outsider film-maker. END_OF_DOCUMENT_TOKEN_TO_BE_REPLACED