The story of two singers/prostitutes that dream of a big house, 160kg former opera diva/wife of an ex-minister of Agriculture that was kidnapped, a police captain with a tapeworm, a rock band that want to become famous, an ex-police captain with a chiken egg under his armpit and many others intresting persons… END_OF_DOCUMENT_TOKEN_TO_BE_REPLACED

Review by Jonathan Rosenbaum:
It’s been a full quarter of a century, but I still harbor fond memories of a low-budget French comedy called Valparaiso Valparaiso, a first feature starring Alain Cuny and Bernadette Lafont that I saw at Cannes in 1973. A lighthearted satire about the myopia of romantic French revolutionaries, it details an elaborate hoax perpetrated on a befuddled leftist–a character so absorbed in the glory of departing for Chile to fight the good fight as a special agent that he doesn’t even notice the political struggle going on around him on the French docks when he leaves. END_OF_DOCUMENT_TOKEN_TO_BE_REPLACED

“Blood-red posters featuring portraits of wanted ‘terrorists’ decorated every street wall in occupied France during World War II, and this account of how 23 foreigners working for the Resistance were caught and executed dramatises one of the heroic myths of the Occupation. But Cassenti adopts a radically different perspective from the humanist ‘honesty’ of L’Armée des Ombres or even Lacombe Lucien, and instead attempts a Marxist analysis of the myth and what it means, historically, to re-enact it. As it moves from one level of representation to another with a Brechtian approach to performance, the film occasionally obscures its aims but never fails to challenge the way we receive history in the cinema.” – Time Out Film Guide
END_OF_DOCUMENT_TOKEN_TO_BE_REPLACED

With its giddily complex noir plot and color-drenched widescreen images, Made in U.S.A was a final burst of exuberance from Jean-Luc Godard’s early sixties barrage of delirious movie-movies. Yet this chaotic crime thriller and acidly funny critique of consumerism—starring Anna Karina as the most brightly dressed private investigator in film history, searching for a former lover who might have been assassinated—also points toward the more political cinema that would come to define Godard. Featuring characters with names such as Richard Nixon, Robert McNamara, David Goodis, and Doris Mizoguchi, and appearances by a slapstick Jean-Pierre Léaud and a sweetly singing Marianne Faithfull, this piece of pop art is like a Looney Tunes rendition of The Big Sleep gone New Wave. (Criterion) END_OF_DOCUMENT_TOKEN_TO_BE_REPLACED 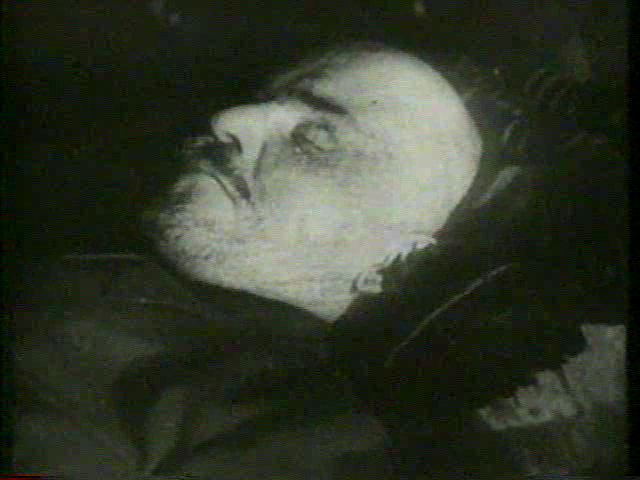 Godard’s meditation on things Russian and cinematic, featuring JLG himself as “The Idiot” My own not very good quality VHS recording from a NTSC TV broadcast, but I know of no other source for this. With some English narration and French dialog with subtitles. Video collages of Russian films, in the style of Histoire(s) and other Godard films of this period. END_OF_DOCUMENT_TOKEN_TO_BE_REPLACED