A group of immigrants from the south of Italy live collectively in the Milano’s suburbia in the 1974. Not only they share the house, but also hopes and troubles that in those years where part of the Italian society. Loves and fights among them are the mirror of the difficult environment in which the poor south Italians found themselves in the 70s in the industrial cities of north Italy. END_OF_DOCUMENT_TOKEN_TO_BE_REPLACED

Plot
Three young men in a small town in Southern Italy lead directionless lives wandering around town, telling lies and boasting about their alleged romantic conquests. When one goes off to Rome with his Aunt, he returns with fabulous stories about the nightlife, the women and the modern advancements of the big city. He vows he will return, but soon is back to his familiar pattern of hanging out with his idle friends in pursuit of a good life they may never see. The film was written and directed by Lina Wertmuller, who vividly captures the mood of the sleepy town where the three young men seemed destined to spend their uneventful lives. ~ Dan Pavlides, All Movie Guide END_OF_DOCUMENT_TOKEN_TO_BE_REPLACED 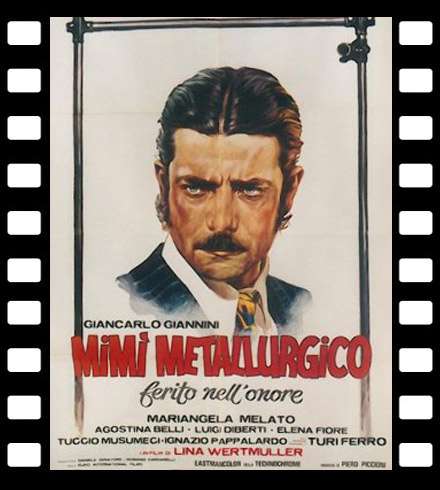 Mimi is a Sicilian dockworker who loses his job when he votes against the Mafia candidate in what he thinks is a secret ballot. He leaves his wife behind and goes to Turin, where he meets and moves in with Fiore, a street vendor and Communist organizer. They have a child, he works non-union jobs, and again he comes to the Mafia’s attention. This time they’re impressed, promoting him to a supervisor’s job back in Sicily. He must keep Fiore and the child a secret, which is fine with Fiore, as long as he never makes love to his wife. He doesn’t, and when she becomes pregnant, he knows he’s a cuckold. His personal revenge and the Mafia’s tentacles then intertwine in tragicomic ways. (IMDb) END_OF_DOCUMENT_TOKEN_TO_BE_REPLACED