A wealthy land baron’s sadistic son has taken to abusing the local citizenry with his bullwhip in perverse, evil games.
Prospector Franco Nero returns home to help his alcoholic half-brother and finds a maniacal, bullwhip-wielding tyrant controlling the land and Nero’s sibling.
Nero joins forces with his kin to try to beat the sadistic creep and his followers. END_OF_DOCUMENT_TOKEN_TO_BE_REPLACED 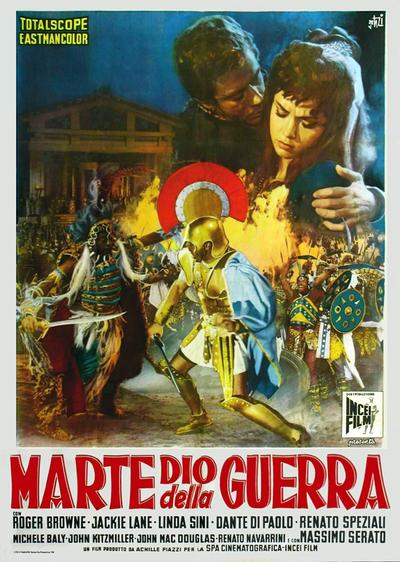 The king of Telbia defeats an African army through the intervention of the war god Mars. Remaining on Earth, Mars falls in love with the human girl Daphne, but she is forced to become a priestess in the temple of Venus. Mars tries to free her, but falls under the spell of Venus, who keeps him prisoner. Daphne, meanwhile, having violated the sanctity of the temple, is condemned to be devoured by a monster.

Director Marcello Baldi composes his shots to make full use of the Totalscope image, making this picture a must in widescreen. Highlights include the opening battle between the Greek and African armies and a Little Shoppe of Horrors-type plant monster to whom maidens are sacrificed. END_OF_DOCUMENT_TOKEN_TO_BE_REPLACED