Set at a factory that makes aircraft for World War II, Roma and Brad Maple’s marriage begins to show signs of difficulty. Their problems get worse when Brad’s friend Corky, who wants to work at the factory to avoid being drafted, arrives to stay with them and makes a move for Roma. END_OF_DOCUMENT_TOKEN_TO_BE_REPLACED

50 Million Frenchmen is the film adaptation of the hit Broadway play with all of Cole Porter’s music eliminated, with the exception of “You Do Something To Me”, which is used as background music. The songs were omitted because box office receipts for musicals were down and Warner Brothers apparently didn’t want to risk a flop. The movie was originally filmed in 2-color Technicolor, but all that remains is this black and white version. END_OF_DOCUMENT_TOKEN_TO_BE_REPLACED

Plot: A movie musical about…wrestling? Turns out the public grew weary of musicals while Sit Tight was made, so most of the tunes were jettisoned prior to release. What remains is a wrestling comedy filled with plenty of pre-Code friskiness. Athletic funnyman Joe E. Brown plays Jojo Mullins, who has an eye for the ladies although his heart belongs to the manager (Winnie Lightner) of the health club where he works. Eager to show the ring prowess he learned by correspondence, Jojo gets his chance in a big-time match. Paul Gregory and Claudia Dell (rumored to be the model for Columbia Pictures logo) play the subplot’s young lovebirds in this energetic comedy that’s one of nearly 50 films directed by Lloyd Bacon in the 1930s. From Warner Brothers Studio! END_OF_DOCUMENT_TOKEN_TO_BE_REPLACED

From start to finish this little known throwback to the best mad-cap screwball comedies of the 1930s is guaranteed to tickle the most jaded funny bone. Vincent Doane, played by Fred MacMurray, is a successful advertising executive who has come under severe scrutiny by his wife of five years, Paula, played by the gorgeous Madeleine Carroll, for the simple reason that he has been keeping rather late nights trying to woo a rather wealthy client, a Mr. Fraser, into signing a lucrative contract. The problem is Paula has serious doubts about the veracity of her husband’s story, thinking that Mr. Fraser is in reality, well, you guessed it. In order to cover up the real identity of his client–and it really is a client–Vincent goes to great lengths, entangling himself further and further into a hilarious web of lies and misadventures that, in the hands of a master comedian like Fred MacMurray, are simply unforgettable. END_OF_DOCUMENT_TOKEN_TO_BE_REPLACED 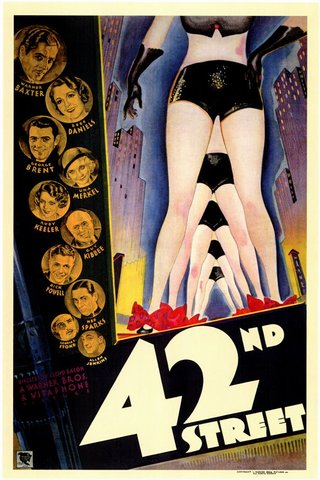 Plot:
Julian Marsh, an sucessful Broadway director, produces a new show, inspite of his poor health. The money comes from a rich old man, who is in love with the star of the show, Dorothy Brock. But she doesn’t reply his love, because she is still in love with her old partner. At the night before the prmiere, Dorothy Brock breaks her ankle, and one of the chorus girls, Peggey Sawyer tries to take over her part. END_OF_DOCUMENT_TOKEN_TO_BE_REPLACED