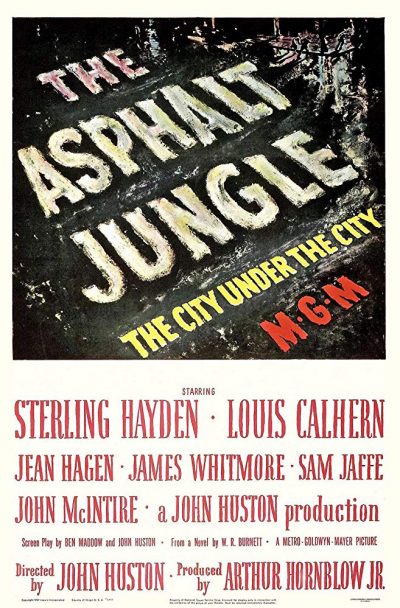 The Asphalt Jungle is a brilliantly conceived and executed anatomy of a crime — or, as director John Huston and scripter Ben Maddow put it, “a left-handed form of human endeavor.” Recently paroled master criminal Erwin “Doc” Riedenschneider (Sam Jaffe), with funding from crooked attorney Emmerich (Louis Calhern), gathers several crooks together in Cincinnati for a Big Caper. Among those involved are Dix (Sterling Hayden), an impoverished hood who sees the upcoming jewel heist as a means to finance his dream of owning a horse farm. Hunch-backed cafe owner (James Whitmore) is hired on to be the driver for the heist; professional safecracker Louis Ciavelli (Anthony Caruso) assembles the tools of his trade; and a bookie (Marc Lawrence) acts as Emmerich’s go-between. The robbery is pulled off successfully, but an alert night watchman shoots Ciavelli. Corrupt cop (Barry Kelley), angry that his “patsy” (Lawrence) didn’t let him in on the caper, beats the bookie into confessing and fingering the other criminals involved. From this point on, the meticulously planned crime falls apart with the inevitability of a Greek tragedy. Way down on the cast list is Marilyn Monroe in her star-making bit as Emmerich’s sexy “niece”; whenever The Asphalt Jungle would be reissued, Monroe would figure prominently in the print ads as one of the stars. The Asphalt Jungle was based on a novel by the prolific W.R. Burnett, who also wrote Little Caesar and Saint Johnson (the fictionalized life story of Wyatt Earp). — Hal Erickson END_OF_DOCUMENT_TOKEN_TO_BE_REPLACED