Quote:
Tormented by twisted desires, a young man takes drastic measures to rid his grotesquely dysfunctional family of its various afflictions in this astonishing 1965 debut from Marco Bellocchio. Charged by a coolly assured style, shocking perversity, and savage gallows humor, Fists in the Pocket (I pugni in tasca) was a gleaming ice pick in the eye of bourgeois family values and Catholic morality, a truly unique work that continues to rank as one of the great achievements of Italian cinema. END_OF_DOCUMENT_TOKEN_TO_BE_REPLACED

SYNOPSIS:
This is an Italian adaptation of The Sea Gull by the Russian playwright Anton Chekhov.
A young writer is trapped between his awful actress mother (Laura Betti) and the knowledge that he has only a mediocre talent as a playwright and almost no force of character. After the young man in this story suffers the loss of his mistress to his self-satisfied novelist stepfather, his self-respect is so shattered that he commits suicide.
(allmovie) END_OF_DOCUMENT_TOKEN_TO_BE_REPLACED

Quote:
The real life of Tommaso Buscetta the so called “boss of the two worlds”, first mafia informant in Sicily 1980’s. END_OF_DOCUMENT_TOKEN_TO_BE_REPLACED

Synopsis:
A mosaic of several intertwined stories questioning the meaning of life, love and hope, set during the last six days in the life of Eluana Englaro, a young woman who spent 17 years in a vegetative state.

Review:
Following a car accident, Eluana Englaro lay in a coma for 17 years. Doctors who assessed her described her as being in a persistent vegetative state, doomed never to awaken, but of course there were many who campaigned to keep her alive, whether in hope of a miracle or simply because they felt that what life she had left must be preserved. In February 2009, the decision was made to remove her feeding tube and allow her to die naturally. A court battle ensued, with the matter going all the way to parliament, exposing a deeply divided nation. END_OF_DOCUMENT_TOKEN_TO_BE_REPLACED 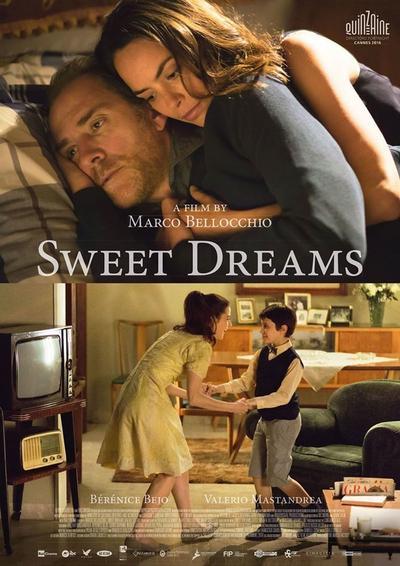 Quote:
With the innocuously titled Sweet Dreams (Fai bei sogni), Italian director Marco Bellocchio stages a gentle, eminently watchable return to some of the key themes that have haunted his 50 years of filmmaking, particularly the scarring left by a dysfunctional family and maternal love gone awry. The story of a 9-year-old boy who loses his beloved mother is a much simpler, more direct film than the thematically rich My Mother’s Smile (2002), and has none of the churning family anger of Fists in His Pocket (1965). But based on journalist Massimo Gramellini’s best-selling autobiographical novel, it has an emotional unity and urgency that holds the attention, only flagging in the last innings of a surprisingly compact drama running well over two hours. END_OF_DOCUMENT_TOKEN_TO_BE_REPLACED

Almost exclusively featuring his family, Bellocchio filmed over a ten year period with segments shot from 1999 to 2008. It begins when Elena (Bellocchio’s daughter, and an incredibly natural performer) is five. Elena’s mother, Sara (Finocchiaro), is an actress and is often away from home so Elena spends much of her time with her uncle Pier Giorgio (Bellocchio’s son), a frustrated artist. They live in the small town of Bobbio (Bellocchio’s hometown) with Pier Giorgio’s spinster aunts (Letizia and Maria Luisa Bellocchio).

Over ten years, the film follows these difficult relationships as the characters come and go from Bobbio, and Bellocchio captures the hopes, disappointments and yearnings of his own family. Moments from Bellocchio’s other films including Fist in His Pocket and The Nanny are also interspersed throughout as quick flashes that relate to the family’s onscreen drama. END_OF_DOCUMENT_TOKEN_TO_BE_REPLACED