When novelist Alessandro Battavia commits suicide, a taxi driver named Evangile and her brother Nord believe they are characters imagined in a novel, probably one written by God. Because they see their lives as “merde,” they go in search of God to get their story rewritten. Along the way, believing everything is imaginary anyway, they shoot people, rob pharmacies, and tie up the residents of places they squat. They also gather a taxi full of eccentrics, including a priest, Battavia’s suicidal widow, and a policewoman; various couples pair off. Soon life imitates art: the events and ellipses seem lifted from modern fiction as the group’s quest for God continues. What’s real? END_OF_DOCUMENT_TOKEN_TO_BE_REPLACED

Quote:
This Proustian documentary, made when Oliveira was 93 years old, explores the great Portuguese film-maker’s relationship with his home town, Oporto, the place which inspired his first film Douro, Faina Fluvial way back in 1931. Using old photographs and newsreels with dramatic reconstructions, he offers a vivid portrait of a city caught between the old and the new. When he was a child, Oporto didn’t even have proper cinemas, film shows were improvised in sheds, Oliveira (born 1908) recalls. Most of the landmarks familiar from his youth have vanished. The brothels and cafés where he and his artist friends used to while away their days are long since closed. Even the house where he grew up is in ruins. The city I remember only remains alive in my sad memory, he sadly reflects. Poignant and playful, this is one of the old master’s most accessible late films. END_OF_DOCUMENT_TOKEN_TO_BE_REPLACED

An aged and powerful magnate is dying. He offers Laura, his young and beautiful mistress, a birthday gift; a sophisticated display of virtual reality in which he will “come to life” for her after his death. But Laura much prefers that her mother, the Duchess, who has taken her place in the magnate’s heart and bed, dies instead. END_OF_DOCUMENT_TOKEN_TO_BE_REPLACED

Quote:
The plot of the film is taken from two traditional Portuguese tales: A donzela que vai a guerra («The maiden who went war» 15th Century?), of Judeo-Iberian origin, and a novella, The dead one’s hand, orally transmitted, which forms part of the Bluebeard cycle.

Dom Rodrigo has two daughters, one legitimate, the other bastard, Silvia and Susana. Growing old, and without male heir, Dom Rodrigo decides to marry off Silvia to his neighbour, a rich nobleman, Dom Paio, with the aim of securing and expanding his domain. After a brief visit from the fiancé, a great glutton and skirt-chaser, Dom Rodrigo leaves for the court to invite the king to the nuptials. Upon his departure, he instructs the girls not to open the doors of the mansion to any stranger. END_OF_DOCUMENT_TOKEN_TO_BE_REPLACED

Quote:
Directed by acclaimed Spanish filmmaker Jose Juan Bigas Luna, HUEVOS DE ORO (GOLDEN BALLS) stars Javier Bardem in his breakthrough role (for which he also received a Goya Award nomination). In this satire of Latin machismo and the excesses of the 1980s, Bardem plays Benito Gonzalez, who dreams of building a mighty skyscraper and thereby securing fame and wealth for himself. His main advantages are his uncontrollable self-assurance and skills as a lothario. He marries the daughter of a rich banker while keeping a mistress on the side, but his betrayal of both women begin to destroy his plans for the building as well as his chauvinist self-confidence. Bigas Luna brings his trademarks–an honest exploration of sexuality and surrealistic imagery–to this tale of male egotism and its undoing. END_OF_DOCUMENT_TOKEN_TO_BE_REPLACED 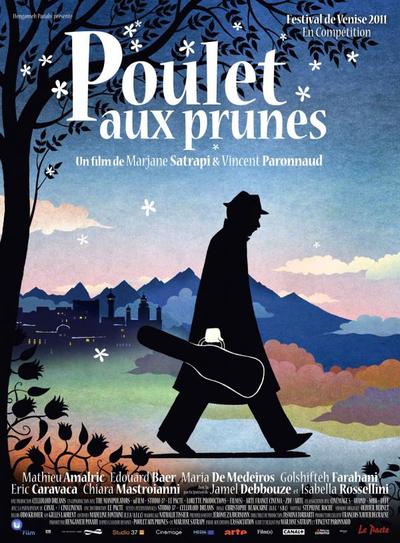 Tehran 1958 – Nasser Ali Khan, the most celebrated violin player, has his beloved instrument broken. Unable to find another to replace it, life without music seems intolerable. He stays in bed and slips further and further into his reveries from his youth to his own children’s futures. Over the course of the week that follows, and as the pieces of this captivating story fall into place, we understand his poignant secret and the profundity of his decision to give up life for music and love. END_OF_DOCUMENT_TOKEN_TO_BE_REPLACED

“Two young French filmmakers, Bernard Dubois and Philippe Venault, had the provocative idea of making a follow-up to the 1964 anthology film, Paris vu par, that became a manifesto for the emerging directors of the New Wave. Unfortunately, the unity of that movement is long gone, and this new project is wildly uneven, ranging from the brilliant (Chantal Akerman’s opening sketch, J’ai faim, j’ai froid, is an entire coming-of-age film compressed into 12 frenetic, hilarious, and ultimately touching minutes) to the intriguing (Philippe Garrel’s Rue Fontaine offers a rare Stateside opportunity to see the work of this acclaimed avant-gardist, whose work suggests a crossing of John Cassavetes with early German expressionism) to the mediocre (the segments by Dubois, Venault, and Frederic Mitterrand) to the unwatchable (Vincent Nordon’s Paris-Plage, certainly the longest 13 minutes in film history). A sad lesson emerges–that the French have no more new ideas than we do–but the Akerman itself is worth it all.” -Jonathan Rosenbaum END_OF_DOCUMENT_TOKEN_TO_BE_REPLACED