Marcello (Marcello Mastroianni) has worked hard all his life to achieve a certain standing and success as a lawyer in Rome. He is pleased to be able to offer the fruits of his success to his son Michele (Massimo Troisi), and is perplexed and distressed that his unambitious son has no interest in any of these things. Michele is serving a term in the Italian military in the port town of Civitavecchia, and Marcello is visiting him there. Here he meets Michele’s salty girlfriend Loredana (Anne Parillaud). The father and son share some meals and explore their differences. END_OF_DOCUMENT_TOKEN_TO_BE_REPLACED

Quote:
Set in the year 1950, Pablo Neruda, the famous Chilean poet, is exiled to a small island in Italy for political reasons. His wife accompanies him. On the island, a local, Mario Ruoppolo, is dissatisfied with being a fisherman, like his father. Mario looks for other work and is hired as a temporary postman, with Neruda as his only customer. He uses his bicycle to hand deliver Neruda’s mail. Though poorly educated, the postman eventually befriends Neruda and becomes further influenced by Neruda’s political views and poetry. END_OF_DOCUMENT_TOKEN_TO_BE_REPLACED 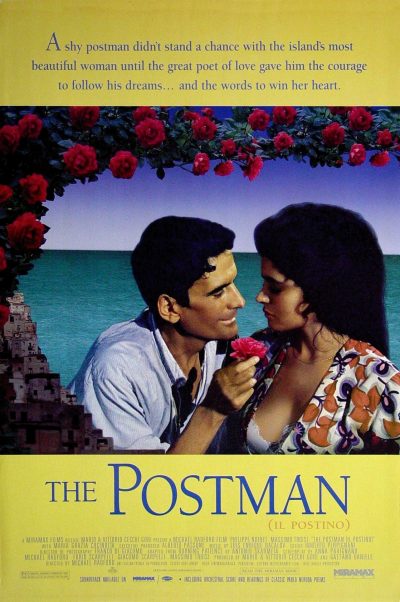 Synopsis:
Pablo Neruda, the famous Chilean poet, is exiled to a small island for political reasons. On the island, the unemployed son of a poor fisherman is hired as an extra postman due to the huge increase in mail that this causes. Il Postino is to hand-deliver the celebrity’s mail to him. Though poorly educated, the postman learns to love poetry and eventually befriends Neruda. Struggling to grow and express himself more fully, he suddenly falls in love and needs Neruda’s help and guidance more than ever. END_OF_DOCUMENT_TOKEN_TO_BE_REPLACED