Robinson, appropriately named as we will soon discover, is on vacation in Biarritz with his wife. What follows is the story behind the loss of his arm, a story that becomes increasingly bizarre and eventually apocalyptic, leading us down a narrative path of labyrinthine complexity. The resulting film is an extraordinary feat of imagination and daring, set against the backdrop of a world on the verge of destruction. END_OF_DOCUMENT_TOKEN_TO_BE_REPLACED

Olivier is a real estate agent so broke he camps out in the apartments he is supposed to be selling. The death of his mother brings along many surprises, including a very unexpected inheritance: a run-down building on the outskirts of Paris! Faith renewed, Olivier is going to be able to pay long overdue child support, rebuild his relationship with his daughter, help his dad out and square up with his ex-wife. His hopes die out when he sees the building: it is completely run down, filthy, a burden rather than the life raft he needed. Moreover, an old woman, Liliane, is a squatter on the top floor, and he can’t flip the place with her around. END_OF_DOCUMENT_TOKEN_TO_BE_REPLACED

Quote:
Some filmmakers have difficulty traveling between the short format and feature films, the former more often than not feeling like exercises, excerpts, or condensations, or the latter, in rarer cases (given the relative death of the short format some 60-odd years ago) seeming simply like brief ideas outstaying their welcome. The aesthetic of writer/director Eugène Green is so clean and simple in this age of image saturation and hyper-abundant kinetics that his “mini-film” Les Signes feels as natural and fluid as his fascinating longer features like 2004’s Le Pont des Arts and 2003’s miniature knight’s tale, Le Monde Vivant. END_OF_DOCUMENT_TOKEN_TO_BE_REPLACED 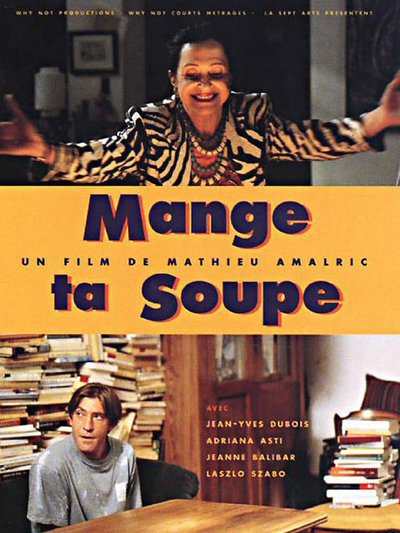 Quote:
Olivier Assayas directed this French drama, examining several relationships over a year’s span, capturing varying textures and shades of feeling between people from late August of one year until early September of the next. Gabriel (Mathieu Amalric) and Jenny (Jeanne Balibar) separate, despite the affection that still binds them. A new love develops between Gabriel and young designer Anne (Virginie Ledoyen) as they overcome their fears and uncertainties. END_OF_DOCUMENT_TOKEN_TO_BE_REPLACED

Synopsis:
Forty-three year old Elle magazine editor Jean-Dominique Bauby – Jean-Do to his friends – awakens not knowing where he is. He is in a Berck-sur-Mer hospital, where he has been for the past several weeks in a coma after suffering a massive stroke. Although his cognitive facilities are in tact, he quickly learns that he has what is called locked-in syndrome which has resulted in him being almost completely paralyzed, including not being able to speak. One of his few functioning muscles is his left eye. His physical situation and hospitalization uncomfortably bring together the many people in his life, including: Céline Desmoulins, his ex-lover and mother of his children; Inès, his current lover; and his aged father who he calls Papinou. END_OF_DOCUMENT_TOKEN_TO_BE_REPLACED

Quote:
Paris today. Simon works as psychologist in human resources department of petrochemical corporation. When Management gets him to investigate one of the factory’s executives, Simon’perception goes disturbingly chaotic and cloudy. The experience affects his body, his mind, his personal life and his sensibility. The calm assurance that made him such a rigorous technician starts to falter. END_OF_DOCUMENT_TOKEN_TO_BE_REPLACED