Quote:
Shinzaburo flees an unwanted marriage with his brother’s widow and lives quietly as a teacher distanced from his family. On the night of the summer Obon festival, he meets a beautiful courtesan named Otsuyu, whom he doesn’t recognize as a ghost. But his interactions with her are leaving him weakened. Because she has a much more obviously ghostly attendant, Shinzaburo becomes frightened & visits Kiku, the temple priest, for an exorcism. END_OF_DOCUMENT_TOKEN_TO_BE_REPLACED

This drama is adapted from a Japanese television mini-series. In the story, an industrialist learns of a medical condition which will greatly shorten his life. He is on a trip to Europe at the time, and a glimpse of a Japanese woman in that setting causes him to fantasize about her as the personification of his impending death. As his dialogue with his imagined mortality continues, he actually meets the living woman who is the template for his fantasy, and together they tour rural churches. Gradually he comes to some kind of peace about the diagnosis. When he returns to Japan, he is met with a series of challenges which profoundly test the lessons he has learned. END_OF_DOCUMENT_TOKEN_TO_BE_REPLACED

Quote:
Ogata’s first leading role was in Masumura’s Sex Check — the Second Sex (1968). Here, Ogata plays Shiro Miyagi, a sprinter with Olympic aspirations whose dreams were shattered by WWII. A broken man, he leads the dissolute life of a gigolo until a chance meeting with a fiery young athlete named Hiroko (Michiyo Yasuda, who also plays Naomi in A Fool’s Love). Realizing that she has talent as a sprinter, Miyagi sees a second chance at Olympic glory in becoming her coach. Following Miyagi’s unconventional, military-style training, Hiroko sets a record for the 100-meter dash, but her greatest hurdle proves to be a “sex check” which all professional athletes must pass. The Second Sex shows the love-hate relationship between athlete and coach as a means to explore a hypothesis about gender, androgyny, and human potential. This is, simply put, an unclassifiable film. END_OF_DOCUMENT_TOKEN_TO_BE_REPLACED 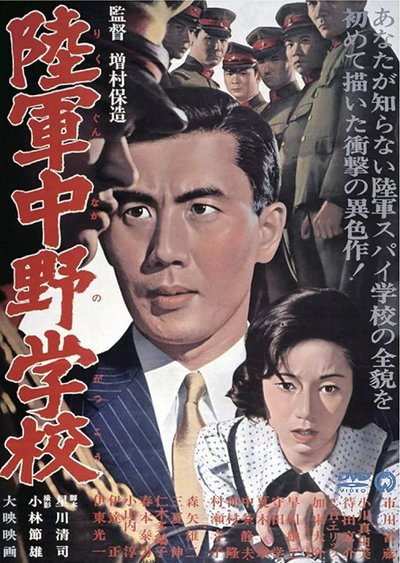 How a young second lieutenant becomes your basic Bond is the subject of this spy-vs.-spy noir set in 1938 at the start of the Sino-Japanese War. Jiro (Raizo Ichikawa) leaves his fiancée for a mysterious military assignment — he and a few good men are to be trained as special agents at the newly established Nakano Spy School, based on the British model. (The girlfriend, meanwhile, becomes involved in the machinations of the British themselves.) A True Fiction-style narrative offers both lessons in spying (bring your notepad, and a sense of humor) and the lessons of spying: for all its worldly ideals, and even without uniforms, the Spy School is a microcosm of a closed society. END_OF_DOCUMENT_TOKEN_TO_BE_REPLACED

Synopsis:
Isazo (Ichikawa Raizo), often called ‘The Ripper’, is a living legend in the world of the Yakuza. Known for his swordsmanship and bravery, but also for his polite manners, and a gifted talent in gambling. One late fall, while staying at an inn near Fukushima, Isazo befriends a young boy whose mother turns out to be his old love Yoshino, with whom he was unable to marry due to the class differences between them. END_OF_DOCUMENT_TOKEN_TO_BE_REPLACED