A criminal, his friend and his former girlfriend find their lives intertwining with each other. END_OF_DOCUMENT_TOKEN_TO_BE_REPLACED

plot outline: After a chance meeting in a Bradford cemetery with Barbara, a young American actress, aspiring writer Richard Tennant breaks off his engagement, quits the undertaking business and heads off to LA to find true love with Barbara. But once there, Richard finds he has a rival in Patterson, a rising film director, who promises to take Barbara away from her job waitressing and make a star of her. END_OF_DOCUMENT_TOKEN_TO_BE_REPLACED

from cinematik
Saimaa-ilmiö is probably the first properly made rock film made in Finland. Such basics as including the songs in their entirety, shooting with multiple cameras, reducing interviews to a minimum and using them to express the atmosphere, not as compulsory fillers-in, were unheard of in Finland at the time. Concentrating on the music, not everything around it, Saimaa-ilmiö captures much of the leisurely feel of the lake tour. END_OF_DOCUMENT_TOKEN_TO_BE_REPLACED 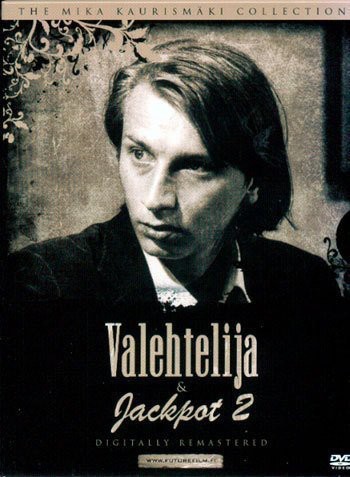 Quote:
Three young people, two boys and a girl, meet on a Friday evening in an urban post-disaster setting which has brought Helsinki to ruins. The boys’ sole purpose of life is to play a Flip-Flop pinball machine. END_OF_DOCUMENT_TOKEN_TO_BE_REPLACED

He must show that he is capable of ‘living properly’ and possessing a ‘respectable occupation and a family he can support’. Otherwise the money would go to a foundation the chairman of which the lawyer himself happens to be! END_OF_DOCUMENT_TOKEN_TO_BE_REPLACED

Plot Synopsis from AllMovie
This well-paced farce sends up intellectual thrillers as hitman Rosso (the handsomeKari Vaananen, also co-scripter) is assigned the job of eliminating a certain Finnish woman who coincidentally was once his summer love. The reluctant gangster heads north from Sicily and ultimately lands in the remote Finnish countryside looking for his target, Maria (Leena Harjupatana). Rosso and Maria’s brother take off in an old car to find her, and along the way they also manage any number of robberies and quick getaways. Their pursuers are bumped off to the sounds of rousing music and a quote here and there from Dante, who else? While Dante’s comedy was divine, this is good earth-bound fun. END_OF_DOCUMENT_TOKEN_TO_BE_REPLACED