In this visually stylish comedy, Angele is an attractive woman just edging into middle age who is looking for companionship without commitment. Her co-worker Samantha has more boyfriends than she knows what to do with, and Marie, the youngest of the group, is still learning the ropes of love. END_OF_DOCUMENT_TOKEN_TO_BE_REPLACED

Synopsis:
A French little town, at the end of the twenties. Julien Davenne is a journalist whose wife Julie died a decade ago. He gathered in the green room all Julie’s objects. When a fire destroys the room, he renovates a little chapel and devotes it to Julie and his other dead persons. END_OF_DOCUMENT_TOKEN_TO_BE_REPLACED 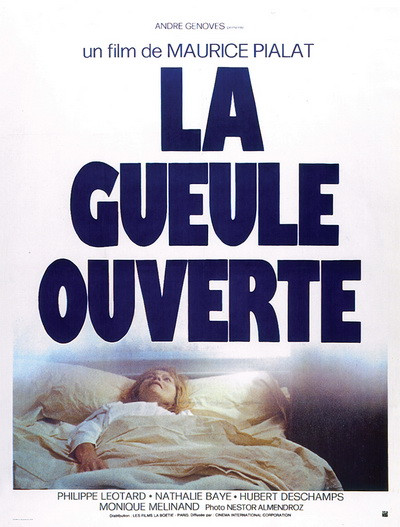 Jonathan Rosenbaum wrote:
“Pialat’s third feature takes up a theme which, on the face of it, could not seem more uninviting: a middle-aged woman dying of cancer, and how this affects her husband and son. But what Pialat makes of this is so recognisable, embarrassing and moving – even, on occasion, funny – that he more than justifies his use of a forbidding subject. He has ideas about how emotions involving sex and death are intimately related – and about the clarity and lack of it that they shed on everything else, as son and father each go lusting after every woman in sight. He has ideas about cinema, too, and an expressive style that can encapsulate a lifetime of memories in a single shot. Without a trace of sentimentality or easy effect, this seemingly semi-autobiographical work is as intense in its way as The Mother and the Whore, and unforgettable.” END_OF_DOCUMENT_TOKEN_TO_BE_REPLACED

A grieving woman pursues a couple whom she suspects of killing her son in a hit-and-run.
Equipped with a few items of clothing, a little bit of money, and a weapon, Diane Kramer leaves for Evian. She has a sole obsession: to find the driver of the moka-colored Mercedes who ran over her son and turned her life upside down. But the path of truth has more bends than it appears. Diane discovers that she must confront another woman, both endearing and mysterious.

Synopsis:
They recount their impressions to the Interviewer. They met through a magazine ad, She and He. They corresponded through the Internet. He responded to her ad seeking someone to fulfil her fantasy for “a pornographic affair”. This is their first meeting in a Paris café. He’s a little reticent. She wants to know whether or not he’s hairy. (He is; he’s Spanish.) They retire to a nearby hotel room. The door of the room closes. Unseen, the affair is consummated… They continue to see one another regularly each week. They find they get along well together. Soon she suggests that they try normal sex the next time… END_OF_DOCUMENT_TOKEN_TO_BE_REPLACED

In this thriller, a UNESCO translator stumbles across a group which is hiding and supporting Nazis and facilitating their travel around the world. She had been given an assignment to study the work of a writer who recently had died, and the conspiracy is revealed in materials he left behind. She comes upon a young man who is going through the writer’s papers, and she immediately assumes he must be one of the conspirators. However, he soon convinces her of his innocence in that regard, and the two together begin a search for the ringleader. END_OF_DOCUMENT_TOKEN_TO_BE_REPLACED

Quote:
During the 1970’s Jean Luc Godard abandoned the notion of making normal commercial films for cinematic distribution in favour of his Marxist-Leninist ‘Dziga Vertov’ propaganda films. The director returned to regular filmmaking in 1980 with Sauve Qui Peut (La Vie), his first theatrical release since his furious outburst against modern bourgeois society in 1967 with Weekend. Delivering another hate-filled attack on almost every aspect of modern society, it’s like he had never been away. END_OF_DOCUMENT_TOKEN_TO_BE_REPLACED