Quote:
An adaptation of an HE Bates story, set in an isolated Wiltshire farm in 1942. With her husband a prisoner-of-war, lonely wife (Jackson) strikes up an intimate relationship with a young soldier (Deacon), a farmer’s boy who hates the army. When he impulsively deserts, she hides him, disguised in drag as her sister. The inevitable tensions of their life are increased when two soldiers from the nearby camp discover ‘the girls’, and the lecherous sergeant (Reed) takes a fancy to the one in drag. The relationship between the wife and the deserter is built carefully and convincingly, but in going for laughs as the bullish sergeant, Oliver Reed lets some of the potential tension slip away. As with many of Bates’ stories, the plot is in any case resolved suddenly and melodramatically. END_OF_DOCUMENT_TOKEN_TO_BE_REPLACED

In the not too distant future, a very smoggy and overpopulated Earth government makes it illegal to have children for a generation. One couple, unsatisfied with their substitute robot baby, breaks the rules and gets in a lot of trouble. END_OF_DOCUMENT_TOKEN_TO_BE_REPLACED

Synopsis:
In 1850, a British garrison defends Fort Kandahar on the North West Frontier of British India. Lieutenant Case is a mixed race British officer under the command of Colonel Drewe. Case is despised by his colonel and a few jealous fellow officers for being part-native. However, due to his background, Case is useful to the British who use him to infiltrate the local tribes. The tribes, united under a war chieftain named Ali Khan, have been fomenting revolt against the British colonial forces. Disguised as a native, Lieutenant Case collects valuable intelligence for his regiment. END_OF_DOCUMENT_TOKEN_TO_BE_REPLACED 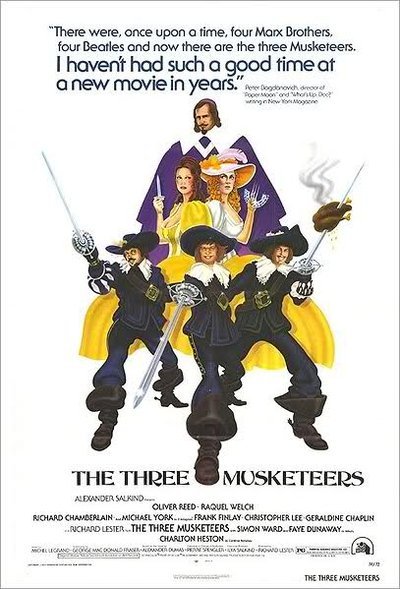 Synopsis:
The young D’Artagnan (Michael York) arrives in Paris with dreams of becoming a King’s Musketeer. He meets and quarrels with three men, Athos (Oliver Reed), Porthos (Frank Finlay), and Aramis (Richard Chamberlain), each of whom challenges him to a duel. D’Artagnan finds out they are Musketeers and is invited to join them in their efforts to oppose Cardinal Richelieu (Charlton Heston), who wishes to increase his already considerable power over King Louis XIII (Jean-Pierre Cassel). D’Artagnan must also juggle affairs with the charming Constance Bonancieux (Raquel Welch) and the passionate Lady De Winter (Faye Dunaway), a secret agent for the Cardinal. END_OF_DOCUMENT_TOKEN_TO_BE_REPLACED 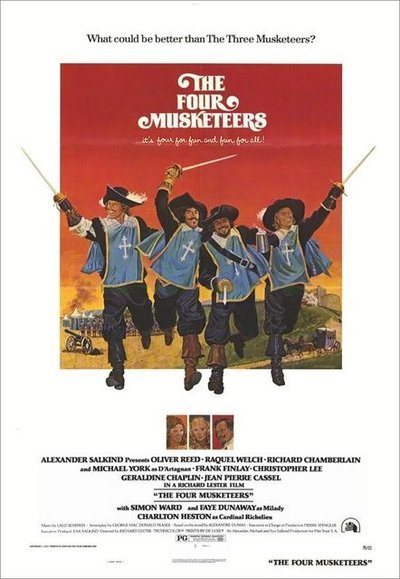 Synopsis:
D’Artagnan has become a Musketeer. Protestants hold La Rochelle, and the Queen loves Buckingham, who’ll soon send ships to support the rebels. Richelieu enlists Rochefort to kidnap Constance, the Queen’s go-between and D’Artagnan’s love. The Cardinal uses the wily, amoral Milady de Winter to distract D’Artagnan. But soon, she is D’Artagnan’s sworn enemy, and she has an unfortunate history with Athos as well. Milady goes to England to dispatch Buckingham; the Musketeers fight the rebels. Milady, with Rochefort’s help, then turns to her personal agenda. Can D’Artagnan save Constance, defeat Rochefort, slip de Winter’s ire, and stay free of the Cardinal? All for one, one for all. END_OF_DOCUMENT_TOKEN_TO_BE_REPLACED

The rich and ruthless rancher Brandt Ruger keeps his beautiful young wife Melissa like a part of his property, subdued to his will. But one day she’s kidnapped by the famous outlaw Frank Calder – just to teach him reading, so he tells her. Calder doesn’t know or care who’s wife she is. He takes care of her well, and eventually Melissa falls in love with him. But Ruger feels humiliated. Full of hate, he sets out to kill him – and Melissa too, if necessary. Together with his friends and the newest technology in guns, which carry 800 yards, he initiates a battue on Calder and his gang. END_OF_DOCUMENT_TOKEN_TO_BE_REPLACED

Quote:
Tommy is based upon The Who’s 1969 rock opera album Tommy It was directed by Ken Russell and featured a star-studded cast, including the band members themselves (most notably, lead singer Roger Daltrey, who plays the title role). END_OF_DOCUMENT_TOKEN_TO_BE_REPLACED