An elegy of exile and an epic immersion in the world of rural Italy during the regime of Benito Mussolini, Francesco Rosi’s sublime adaptation of the memoirs of the painter, physician, and political activist Carlo Levi brings a monument of twentieth-century autobiography to the screen with quiet grace and solemn beauty. Banished to a desolate southern town for his anti-Fascist views, Levi (Gian Maria Volontè) discovers an Italy he never knew existed, a place where ancient folkways and superstitions still hold sway, and that gradually transforms his understanding of both himself and his country. Presented for the first time on home video in its original full-length, four-part version, Christ Stopped at Eboli ruminates profoundly on the political and philosophical rifts within Italian society—between North and South, tradition and modernity, Fascism and freedom—and the essential humanity that transcends all. END_OF_DOCUMENT_TOKEN_TO_BE_REPLACED

New, restored high-definition digital transfer, with uncompressed monaural soundtrack on the Blu-ray edition
The notorious final film from Pier Paolo Pasolini, Salò, or The 120 Days of Sodom has been called nauseating, shocking, depraved, pornographic . . . It’s also a masterpiece. The controversial poet, novelist, and filmmaker’s transposition of the Marquis de Sade’s eighteenth-century opus of torture and degradation to Fascist Italy in 1944 remains one of the most passionately debated films of all time, a thought-provoking inquiry into the political, social, and sexual dynamics that define the world we live in. END_OF_DOCUMENT_TOKEN_TO_BE_REPLACED

Quote:
Tibetan yogi Milarepa is one of the main teachers of Buddhism. His autobiography is filmed here parallel with a story of a youth of our days, both seeking answers to same questions. They have masters whose decisions they don’t fully catch, and there are women whose roles are ambiguous. Master and disciple depend in each other, in fierce search for truth; only belief and honor count. Cavani made an extraordinary movie which has not lost any of its charm within years. It is a meditation of man’s destiny and also a narrative of the parallel but non- tangential lives of man and woman. This film can be read as a visual philosophical tract and an homage to Milarepa. Aside of that, the film is very beautiful visually and the great actors fully contribute to the ideas of both Milarepa and Cavani.
END_OF_DOCUMENT_TOKEN_TO_BE_REPLACED 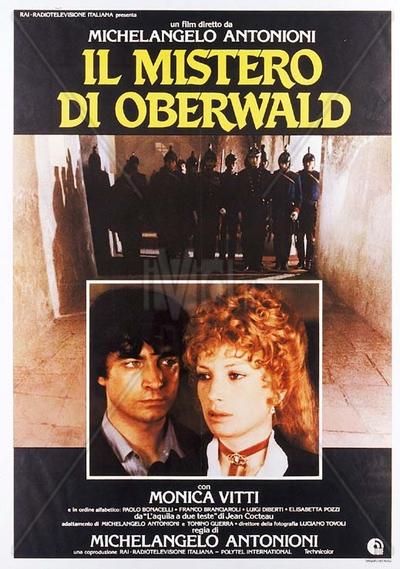 The Passenger (1975) marked the end of Antonioni’s three picture deal with MGM, and simultaneously the end of his mainstream acceptance. Although revered now as one of his finest works, The Passenger had lukewarm reception at best, with most of the American critics still bitter of Antonioni’s caricaturing of American capitalism in Zabriskie Point (1969). Since those two films had been costly flops, Antonioni found himself unable to secure investors for the arthouse pictures he’d become known for. Five years past, and still not a film, until finally Antonioni settled on The Oberwald Mystery. END_OF_DOCUMENT_TOKEN_TO_BE_REPLACED