Lucy is a young university student possessed by a kind of radical passivity. She lets a flip of a coin decide the outcome of a random sexual encounter and she displays an uncomplaining patience when facing the repetitions of her various menial jobs that fund her studies. One day she answers an ad in the student newspaper and interviews for a job to be a lingerie waitress. But she is secretly being initiated into a world of strange new work; one where she will have to give into absolute submission to her clients by being sedated; becoming a Sleeping Beauty. Eventually this unnerving experience begins to bleed into her daily life and she finally develops the will to break the spell by discovering what happens to her while she sleeps. With a fearless performance by Browning, Leigh creates a bold cinematic vision; one where Lucy, both in her clandestine sexual adventures and in her mundane daily existence, lives with the same unflinching and brutal honesty. END_OF_DOCUMENT_TOKEN_TO_BE_REPLACED

Synopsis
When Melanie goes home from the pub with a handsome stranger, she’s captivated by his charm and attentiveness.
He sails her away to his ‘castle’- a rundown shack on a deserted island. But when seduction becomes deception and passion becomes possession, Melanie realizes that she has been kidnapped.
Torn between fear and desire, Melanie must escape – but her ardent admirer has other plans. END_OF_DOCUMENT_TOKEN_TO_BE_REPLACED

Synopsis by Mark Deming
A man on the edge of collapse falls into a well of despair in this psychological drama from Australia. Tom White (Colin Friels) is an architect who is emotionally reaching the end of his rope. Edgy, confused, and losing touch with reality, White finds himself obsessively working on a project from which he was removed weeks before, and his hands shake so badly he can barely hold a pencil. Tom’s superiors suggest he should spend a few days away from the office to regain his bearing, but instead of returning home to his wife (Rachael Blake) and children, he goes on a bender. END_OF_DOCUMENT_TOKEN_TO_BE_REPLACED 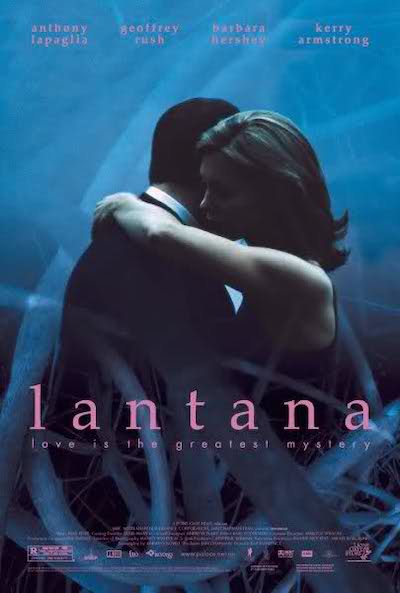 The relationships of four couples unravel after the discovery of a young woman’s body in Lantana bush in suburban Sydney. END_OF_DOCUMENT_TOKEN_TO_BE_REPLACED