Third-billed Lee Marvin dominates the proceedings in A Life in the Balance. Marvin plays a psycho killer, whose trail is dogged by inquistive young Jose Perez. Jose’s father, musician Ricardo Montalban, has been accused of a series of murders. The boy is convinced that Marvin is the guilty party, and trails the man in hopes of bringing him to justice. No dummy he, Perez leaves a trail for the authorities to follow–a series of smashed-up police call boxes (a similar plot device was deployed for comic purposes by Harold Lloyd in Professor Beware). A Life in the Balance was filmed on location in Mexico City, with a great deal of screen time devoted to a colorful carnival.
Hal Erickson, All Movie Guide END_OF_DOCUMENT_TOKEN_TO_BE_REPLACED 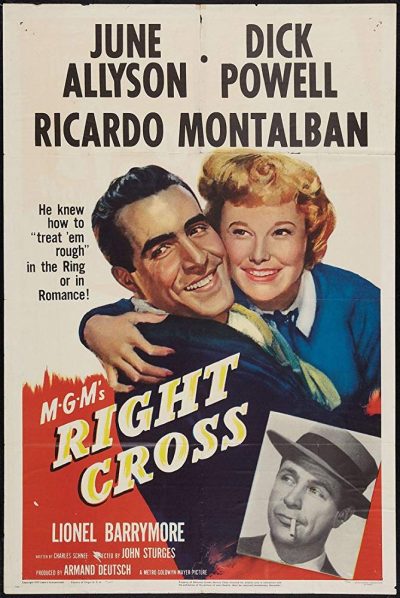 Plot Synopsis by Hal Erickson
Right Cross stars Dick Powell as cynical sportswriter Rick Gavery and Powell’s wife June Allyson as boxing manager Pat O’Malley. Subbing for her incapacitated father (Lionel Barrymore), Pat grooms prizefighter Johnny Monterez (Ricardo Montalban) for the championship. Johnny holds a grudge against the world because he feels that his Mexican heritage has made him an outcast, though curiously the audience never sees any prejudice levelled against him. Gradually, Pat falls in love with the tempestuous Monterez, while Gavery, who’s always carried a torch for Pat, observes from the sidelines. The film wisely avoids the usual boxing-flick cliches, most commendably during the climactic Big Bout. Marilyn Monroe appears unbilled in the opening scene as Dick Powell’s dinner companion. END_OF_DOCUMENT_TOKEN_TO_BE_REPLACED

Plot: Chu Chu Ramirez is a Mexican farm laborer in California, with lofty ideals, who is very proud of his new American citizenship. During his time off, he tries to befriend the alcoholic bar girl Nancy. After working for a month for the subsistence farmer Mr. Ames and his frustrated wife, Chu Chu discovers that his paycheck bounces and Ames stalls in paying him. Just after a confrontation between Ames and Chu Chu, Ames is accidentally wounded by his own shotgun and he and his wife blame it on Chu Chu. Despite the support of his friends and sympathetic sheriff, Chu Chu is given a year’s sentence. Written by Will Gilbert END_OF_DOCUMENT_TOKEN_TO_BE_REPLACED

Synopsis:
In this third sequel to “Planet of the Apes,” the apes turn the tables on the human Earth population when they lead a revolt against their cruel masters in the distant year of 1990. By doing this it creates the time loop that leads to the first film. “Conquest of the Planet of the Apes” is cinematically etched in broad, brash strokes slashing social satire and science fiction suspense with large-scale spectacle. END_OF_DOCUMENT_TOKEN_TO_BE_REPLACED