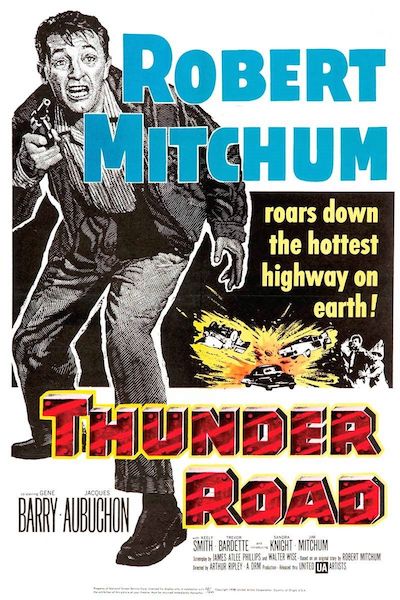 Quote:
The preeminent moonshine movie, the 1958 Thunder Road stars Robert Mitchum as a backwoods bootlegger in Tennessee, getting squeezed by both the federal government and organized crime. Mitchum had a big hand in creating this cult favorite (which reportedly played in drive-ins around America for years), writing the script, producing the movie, and even composing and singing the movie’s theme song, which became a radio hit. Directed by longtime cinematographer Arthur Ripley, the film is strong on characters and action, the latter fulfilled by a memorable chase scene at the end. Mitchum was at an artistic peak at this point in his career, and this is really an indispensable movie for his fans. END_OF_DOCUMENT_TOKEN_TO_BE_REPLACED

from 55th New York Film Festival program
A bit of an anomaly within Minnelli’s often more colorful and ebullient oeuvre, this black-and-white, paranoiac romantic thriller finds the master harnessing his consummate stylishness to spin a haunting, noirish tale. Timid Ann (Katharine Hepburn) marries the highly eligible Alan Garroway (Robert Taylor), whose wealth and good looks conceal an underlying and profound cruelty. Ann grows increasingly obsessed with learning the truth about what happened to Alan’s brother, Michael (Robert Mitchum), who has been missing for some time… This gripping movie casts Hepburn, Taylor, and Mitchum all against type. END_OF_DOCUMENT_TOKEN_TO_BE_REPLACED

IMDB Reviewer:
“The Night Fighters” is listed on IMDB under “A Terrible Beauty”, a deceiving title for a movie that has nothing to do with beauty. Considering it had been directed by the great Tay Garnett, and with a cast that included Robert Mitchum, Richard Harris, Ann Heywood, Cyril Cusak, and Dan O’Herlihy, among others, the early promise seemed to evaporate as we watched it. END_OF_DOCUMENT_TOKEN_TO_BE_REPLACED

Quote:
Set in the wake of the 1916 Easter Rising, a married woman in a small Irish village has an affair with a troubled British officer. END_OF_DOCUMENT_TOKEN_TO_BE_REPLACED

Synopsis:
This, the second adaptation of Raymond Chandler’s novel, is much closer to the source text than the original – Murder, My Sweet (1944), which tended to avoid some of the sleazier parts of the plot – but still concerns private eye Philip Marlowe’s attempts to locate Velma, a former dancer at a seedy nightclub and the girlfriend of Moose Malloy, a petty criminal just out of prison. Marlowe finds that once he has taken the case, events conspire to put him in dangerous situations, and he is forced to follow a confusing trail of untruths and double-crosses before he is able to locate Velma. END_OF_DOCUMENT_TOKEN_TO_BE_REPLACED

The Last Tycoon (1976) is a feature dramatic film based upon Harold Pinter’s screenplay adaptation of F. Scott Fitzgerald’s The Last Tycoon, sometimes known as The Love of the Last Tycoon.

Quote:
Beautifully dark movie which grants Mia Farrow the freedom to showcase the strange range of her gift. Elizabeth Taylor stays close with a deep and sensitive touch, flashing a legitimate side of herself, oft covered up. Robert Mitchum achieves repulsive perfection lurking in the garden, symbolic of the disgust and fear we share in our hide. The entire cast in breath and stone include every sense in totality, placing the actors and ourselves together to spy on each other from above, and within the ornamental mansion. Intense hallucinogenic 1968 camera shots intimately portray the family by chance’s horrific existence. END_OF_DOCUMENT_TOKEN_TO_BE_REPLACED