In this adaptation made during the the London Blitz of George Bernard Shaw’s edgy comedy of the same name, Wendy Hiller as the idealistic title character is running a Salvation Army shelter in the East End that aims to save the souls of the destitute while preserving their physical well-being. She becomes engaged to the sceptical, unworldly Adolphus Cusins (Rex Harrison), a professor of Ancient Greek who discards his agnosticism and joins the Salvation Army to be near his fiancee. Cusins is then startled to learn that Major Barbara in fact comes from a privileged background – she is the grand-daughter of an earl on her mother’s side, and her long-absent estranged father Andrew Undershaft (a young Robert Morley) is a multi-millionaire arms manufacturer. END_OF_DOCUMENT_TOKEN_TO_BE_REPLACED

Alistair MacLean’s two-fisted, no-holds-barred adventure yarns are a natural for the screen. When Eight Bells Toll brings in more slugging, quick action twists, sharp dialog, amusing acting than many pix twice its length.
Anthony Hopkins has a role that creates a character full of resource, courage, cheek and personality. A kind of James Bond, without the latter’s trademarks. Character is a naval secret service agent assigned to find out how millions of pounds in gold bullion are being pirated. He starts his explorations in the bleakness of the Western Highlands of Scotland. Hopkins and his pal (Corin Redgrave) posing as marine biologists find mystery and hostility among the natives and the obvious suspect is a suave, rich Greek tycoon (Jack Hawkins) whose luxury yacht guests some odd characters. END_OF_DOCUMENT_TOKEN_TO_BE_REPLACED

Quote:
Four teenage teddy boys are tried in the Old Bailey, charged with the “murder in the course of theft” of a garage night watchman, a conviction for which carries an automatic death penalty. Although initial evidence from the prosecuting counsel seems damning of the youthful gang, their unorthodox defence lawyer’s skilful arguments soon throw the jury into confusion and disarray. END_OF_DOCUMENT_TOKEN_TO_BE_REPLACED

Synopsis:
William Pitt the Younger, son of a famous politician father, becomes the youngest Prime Minister England has ever known, wins an election on the promise of peace and prosperity, yet ironically ends up as the presiding spirit of an interminable war with Revolutionary France. Both his health and his private life suffer from the strain. END_OF_DOCUMENT_TOKEN_TO_BE_REPLACED 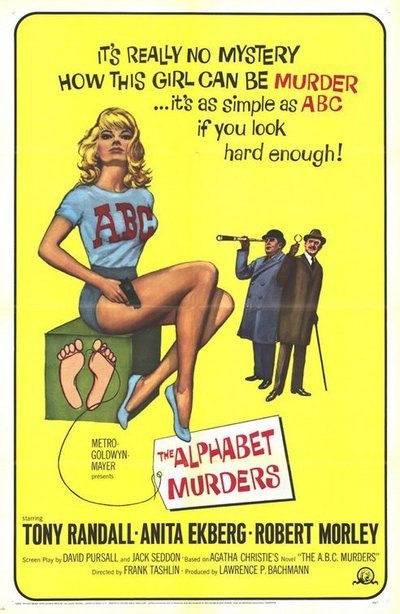 The Belgian detective Hercule Poirot investigates a series of murders in London in which the victims are killed according to their initials. The first victim is A.A. the second B.B. and so on. Poirot is assisted in his investigations by Captain Hastings and Inspector Japp. Written by Mike Hatchett END_OF_DOCUMENT_TOKEN_TO_BE_REPLACED