Quote:
The Illustrated Man is classic Bradbury, a collection of eighteen startling visions of humankind’s destiny, unfolding across a canvas of decorated skin, visions as keen as the tattooist’s needle and as colorful as the inks that indelibly stain the body. The images, ideas, sounds and scents that abound in this phantasmagoric sideshow are provocative and powerful: the mournful cries of celestial travelers cast out cruelly into a vast space of stars and blackness, the sight of gray dust settling over a forgotten outpost on a road that leads nowhere, the pungent odor of Jupiter on a returning father’s clothing. Here living cities take their vengeance, technology awakens the most primal natural instincts, Martian invasions are foiled by the good life and the glad hand, and dreams are carried aloft in junkyard rockets. END_OF_DOCUMENT_TOKEN_TO_BE_REPLACED

Synopsis:
Found injured by rancher Shep Horgan, Jubal Troop is offered a job as cowhand and soon gains Shep’s trust. Mae Horgan, feeling she’s been trapped into marriage with Shep, takes a shine to Jubal, although he is more interested in Naomi Hoktor who is travelling with a wagon train camped on Shep’s land. Pinky, until now top hand and used to Mae’s favours himself, doesn’t think much of the new deal and trouble is inevitable. END_OF_DOCUMENT_TOKEN_TO_BE_REPLACED

An African-American police detective is asked to investigate a murder in a racially hostile southern town. END_OF_DOCUMENT_TOKEN_TO_BE_REPLACED

Synopsis:
In a poor neighborhood of New York, the bitter and lonely Jewish pawnbroker Sol Nazerman is a survivor from Auschwitz that has no emotions or feelings. Sol lost his dearest family and friends in the war and his faith in God and belief in mankind. Now he only cares for money and is haunted by daydreams, actually flashbacks from the period of the concentration camp. Sol’s assistant is the ambitious Latino Jesus Ortiz, who wants to learn with Sol how to run a business of his own. When Sol realizes that the obscure laundry business he has with the powerful gangster Rodriguez comes also from brothels, Sol recalls the fate of his beloved wife in the concentration camp and has a nervous breakdown. His attitude leads Jesus Ortiz to tragedy and Sol finds a way to cry. END_OF_DOCUMENT_TOKEN_TO_BE_REPLACED

Quote:
Hennessy is an Irishman who believes in peace, but who has had connections to the IRA. After his family is killed, and he plots revenge, setting out to assassinate Queen Elizabeth II. END_OF_DOCUMENT_TOKEN_TO_BE_REPLACED

Plot summary [wikipedia.org]The narrative opens in the decade before World War I. We are introduced to the central protagonist of the story, Hans Castorp, a young German. We encounter him when he is in his early 20s, about to take up a shipbuilding career in Hamburg, his home town. Just before beginning this professional career he undertakes a journey to visit his tubercular cousin, Joachim Ziemssen, who is seeking a cure in a sanatorium in Davos, high up in the Swiss Alps. In the opening chapter, Hans is symbolically transported away from the familiar life and mundane obligations he has known, in what he later learns to call the flatlands , to the rarefied mountain air and introspective little world of the sanatorium. END_OF_DOCUMENT_TOKEN_TO_BE_REPLACED 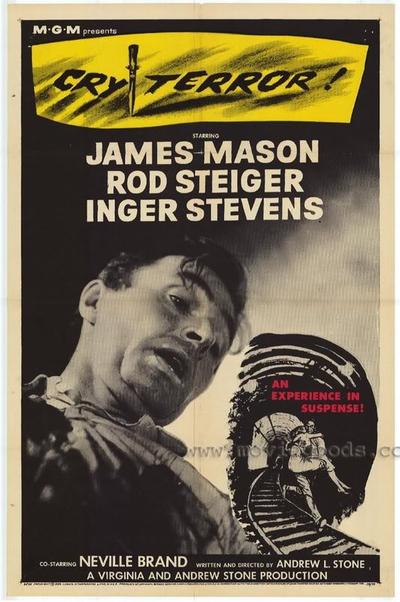 Plot:
A wife, a daughter, a steady job. Yesterday Jim Molner was an ordinary guy. Today he’s a desperate man, frantically trying to save himself and his family, held hostage by a demented terrorist who’s demanding $500,000 not to detonate a bomb he’s planted on a domestic airliner. James Mason and Rod Steiger head an “A” cast in a jolting, psychology-driven thriller that, like The Desperate Hours, Suddenly and other 1950s films, turns home sweet home into the tense site of a family held hostage. Cry Terror! adds a sweaty layer of sexual tension as well, provided by Angie Dickinson as the terrorist’s sinuous moll and Neville Brand as his benny-addled henchman, salivating over Molner’s distraught wife (Inger Stevens). From Warner Brothers! END_OF_DOCUMENT_TOKEN_TO_BE_REPLACED