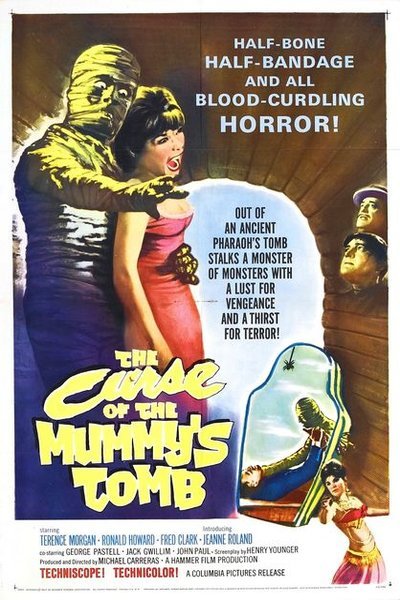 Synopsis:
When British archaeologists disturb the tomb of Ra, they have to deal with a curse that condemns anyone involved to death. The American showman who paid for the expedition, Alexander King, insists in taking the precious artifacts to London for an exhibition even though he could have left them for the local authorities who were prepared to pay a hefty price for them. As a result they not only have to face the curse but the wrath of Egyptians who have vowed have the precious find returned. When King finally has his first public showing, he finds that the sarcophagus is empty, the mummy having been taken or – more ominously – come to life to seek revenge. END_OF_DOCUMENT_TOKEN_TO_BE_REPLACED

It is June 1940. France has fallen and the Germans are posed to invade England. In this desperate hour, British Intelligence has recruited Babette, a pea-brained young woman who has just been evacuated from France. The dim blonde bears a striking resemblance to a former mistress of General von Arenberg, the man responsible for the feared invasion. The plan is that she will use her womanly charms to lure the General into an ambush. Things soon go wrong when Babette is separated from her handsome associate, Gérard de Crécy, and ends up in the hands of the infamous Gestapo chief Shultz. Coincidentally, the latter also wants to have von Arenberg out of the way, and realises that Babette is just the woman he needs… END_OF_DOCUMENT_TOKEN_TO_BE_REPLACED