As part of Želimi Žilnik exhibition “Shadow Citizens”, more than 20 Žilnik’s films will be available for online viewing. Many of these are rarely screened, and all are being made available online to this extent for the first time. The films trace various periods and different working conditions within Žilnik’s practice. They are organized in five sections, each available for viewing during the exhibition for two weeks. END_OF_DOCUMENT_TOKEN_TO_BE_REPLACED

Plot:
Eminent Belgrade physician gets murdered. The investigation is revealing dark side of his character – illegal abortions and abuse of his wife. Wife’s lover is becoming the prime suspect. The newspaper reporter, however, starts his own investigation. Besides being crime story, this movie in quasi-documentary fashion presents alternative cultural scene of Belgrade in late sixties. Written by Dragan Antulov END_OF_DOCUMENT_TOKEN_TO_BE_REPLACED

Quote:
“Srce je mudrih u kuci zalosti” aka “The Heart of the Wise Lives in the House of Sorrow”
Official DVD is still not available so I have decided to upload the film to everyone hoe find it interesting. With a budget of 50-60 thousend euros is the most cheapest film in 2009 in Serbia and big part of that budget is used for 35mm film copy. One of the bizarre moment is that the film was entered in Cape Winelands Film Festival in Capetown together with most expensive Serbian film that year “Sveti Georgije Ubiva Azdahu”
Film is very free adaptation of two old testament story, about Jona and Jacob and I have made that film because I was interested to see how that biblical element will adopt in contemporary Serbian society. END_OF_DOCUMENT_TOKEN_TO_BE_REPLACED

Several people get locked in a turkish bath at night, being hunted by a brutal serial killer, who seems to be seized with the T.T. Syndrome, a brain malady that leads to painful sociopathy. END_OF_DOCUMENT_TOKEN_TO_BE_REPLACED 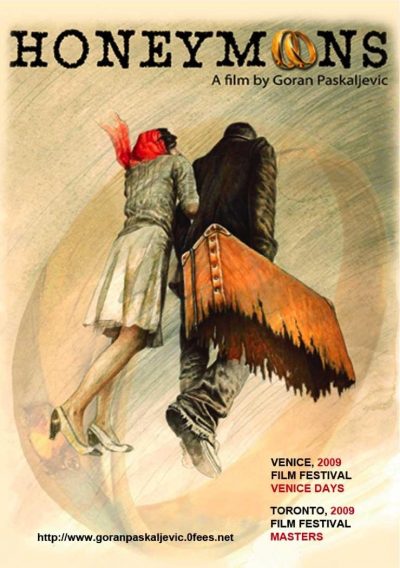 ‘Honeymoons’ shows us that the distance between Eastern and Western Europe is more than a question of kilometers. The films follows two couples, one is Albania, one in Serbia, who in the midst of wedding celebrations decide to leave their respective countries to realize their dreams in Western Europe. They soon find themselves trapped between their countries’ past and their future lives together. END_OF_DOCUMENT_TOKEN_TO_BE_REPLACED

Quote:
One of the most terrible ills of our time, people trafficking, follows the so-called Balkans Route for smuggling people into the West. Bosnian and Croatian papers often carry stories about groups of illegal immigrants discovered by the police, and just as frequent are the news of such imimigrants’ deaths. The Melon Route is inspired by the true story of twelve illegal immigrants who drowned in the river Sava on the border of Bosnia and Croatia. This event has been enlarged in the script, and seen through the eyes of a young Chinese girl, who loses her father in the accident. She enters into a tenuous relationship with an ex-Croatian Army soldier, a cured drug addict suffering from PTSD, who lost everything in the war. The linguistic and cultural barriers between the two protagonists give an added dimension to the film, shot through by the painful realization that it is hard to carry an inescapable burden: one’s place of birth. END_OF_DOCUMENT_TOKEN_TO_BE_REPLACED

Sisters is a 2011 film based on a true story from Serbia. Sisters is about human trafficking.
Two sisters from Krusevac, Serbia, decided to take part-time job in Italy, little did they know that they will become victims of human trafficking, prostitution, and well organized crime organization. END_OF_DOCUMENT_TOKEN_TO_BE_REPLACED