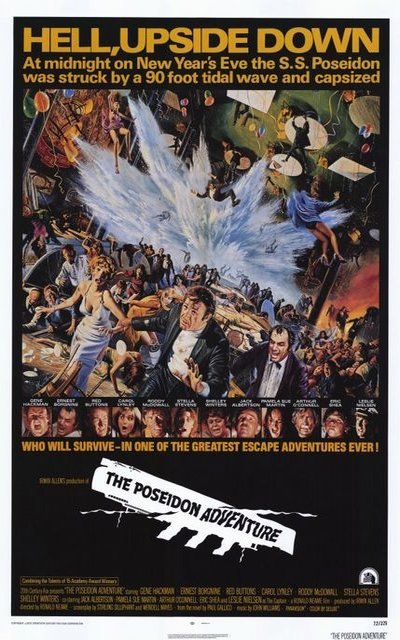 Synopsis:
At midnight on New Years Eve the S.S. Poseidon is struck by a 90′ tidal wave and is capsized. The Reverend Frank Scott leads nine Survivors; an elderly couple, Manny and Belle Rosen headed to Israel to see their grandson; A New York detective and his ex-prostitute wife, Mike and Linda Rogo on their second honeymoon to Italy; A young brother and sister, Robin and Susan Shelby going to meet their parents in Greece; A haberdasher James Martin; a pop singer Nonnie Parry, and a waiter from the ship Acres. They travel from the grand ballroom struggling through, steam, fire and rising water in the up-side-down ship to reach the bottom (the propeller shaft), now the top. END_OF_DOCUMENT_TOKEN_TO_BE_REPLACED

Elvis is notable in Carpenter’s career for two reasons. It was made after Halloween had wrapped, so it offered him an avenue to try his hand at a film away from the horror genre. It was also the first time Carpenter had worked with Russell, who became a frequent collaborator of Carpenter’s. Russell subsequently starred in Escape from New York (1981), The Thing (1982), Big Trouble in Little China (1985), and Escape from L.A. (1996). END_OF_DOCUMENT_TOKEN_TO_BE_REPLACED

Synopsis:
During World War II, an Italian villager (Gina Lollobrigida) befriends three American soldiers. Later, when unsure which of them fathered the daughter she has, she invents a dead captain named Campbell, declares herself his widow and accepts support checks from all three soldiers. Twenty years later, a reunion unexpectedly brings the three veterans — and their wives and children — back to Italy. Mrs. Campbell panics as she endeavors to keep her lively past from her daughter. END_OF_DOCUMENT_TOKEN_TO_BE_REPLACED

In order to smash a dope ring, a federal agent (Howard Duff) makes a deal with an Alcatraz convict (Dan Duryea) to help him infiltrate the ring. END_OF_DOCUMENT_TOKEN_TO_BE_REPLACED

Quote:
While perhaps too consciously schematic in its pairing of a black man and a blind white girl during an era of heightened racial awareness, this small film is a tender and moving story of friendship. Sidney Poitier stars as a man who befriends a blind girl (Elizabeth Hartman) he often sees in the park, and as he comes to understand the harshness of her family life, encourages her to reach out for a better life. END_OF_DOCUMENT_TOKEN_TO_BE_REPLACED

Plot: Chu Chu Ramirez is a Mexican farm laborer in California, with lofty ideals, who is very proud of his new American citizenship. During his time off, he tries to befriend the alcoholic bar girl Nancy. After working for a month for the subsistence farmer Mr. Ames and his frustrated wife, Chu Chu discovers that his paycheck bounces and Ames stalls in paying him. Just after a confrontation between Ames and Chu Chu, Ames is accidentally wounded by his own shotgun and he and his wife blame it on Chu Chu. Despite the support of his friends and sympathetic sheriff, Chu Chu is given a year’s sentence. Written by Will Gilbert END_OF_DOCUMENT_TOKEN_TO_BE_REPLACED Shelly Winters is great at playing unhinged characters. In WHAT’S THE MATTER WITH HELEN?, she teams up with Debbie Reynolds in a tale about two mothers of convicted killers who move to california in order to escape the publicity and threats against them. Helen (Winters) begins to slowly unravel, revealing the true psychotic within. Haunted by the death of her husband, she becomes increasingly dangerous to herself and others, especially Adelle (Reynolds), who may or may not survive. There are some snappy dance routines (highlighting Debbie Reynolds’ talent and cuteness) scattered throughout. Watch for Dennis Weaver (Duel) as Adelle’s love interest.-WHOEVER SLEW AUNTIE ROO?- has Shelly Winters as Roo, the rich widow of a famous magician.
END_OF_DOCUMENT_TOKEN_TO_BE_REPLACED