BRUCE GENTRY, based on a short-lived but well-done post-World War Two adventure comic strip, begins in South America, where Bruce Gentry (Tom Neal), pilot and adventurer, is recruited by a US government agent (Dale Van Sickel) who needs to fly to the States in a hurry. After fighting off some thugs pursuing the agent, Bruce takes to the air with his passenger, who explains that he’s been gathering information on a plot engineered by an unnamed foreign power (it’s those Russians again!) and traitorous American fifth columnists that has as its goal the conquest of the nations of the Americas–North, Central, and South. The weapon the would-be-conquerors intend to use shortly after comes on the scene: a sinister flying saucer that heads for Bruce’s plane at an incredible rate of speed. END_OF_DOCUMENT_TOKEN_TO_BE_REPLACED

From the files of Jerry Blake:
THE MASKED MARVEL.

THE MASKED MARVEL is almost universally recognized as one of Republic’s best. The action alone would be enough to place it in the top ten. The story deals with a wave of sabotage unleashed by Mura Sakima, a Japanese super-spy who employs former racketeer Killer Mace and other no-good turncoats in his evil schemes to destroy the American war effort. The World-Wide Insurance Company, principal insurer of the war materials, sends its four of its top investigators to stop the sinister sabotage. The Masked Marvel, mysterious foe of crime, aids the quartet in their battle, and it becomes evident that he is secretly one of the foursome. The Marvel is aided by Alice Hamilton, daughter of Warren Hamilton, the murdered head of World-Wide, and hindered by Hamilton’s partner, Martin Crane, who is actually in league with Sakima. END_OF_DOCUMENT_TOKEN_TO_BE_REPLACED

IMDB:
A police detective goes undercover and joins a gang of Nazi agents using explosive gases and artificial lightning to sabotage the war effort, whom he battles in disguise as The Black Commando. END_OF_DOCUMENT_TOKEN_TO_BE_REPLACED

Plot summary for
Manhunt of Mystery Island
A young couple journeys to Mystery Island to rescue the girl’s father, who is being held prisoner by the evil Captain Mephisto, a pirate from 200 years ago who uses his Transformation Machine to travel forward in time and disguise himself as one of the four owners of Mystery Island. Written by Anonymous END_OF_DOCUMENT_TOKEN_TO_BE_REPLACED 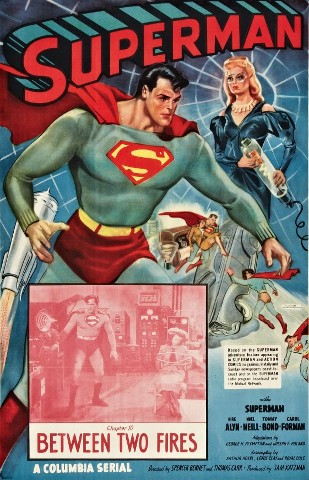 allmovie wrote:
This adventure is the first live-action Superman serial and was one of the most successful multi-chapter films ever made. Superman is played by B-movie hero Kirk Alyn. The story centers upon the hero and the nefarious Spider Lady, who is trying to rule the Earth. If she cannot have complete control, she plans on shrinking it with her powerful reducer ray. Much of the episodes center upon Superman’s relationship with Lois Lane and upon his ability to fly.
END_OF_DOCUMENT_TOKEN_TO_BE_REPLACED