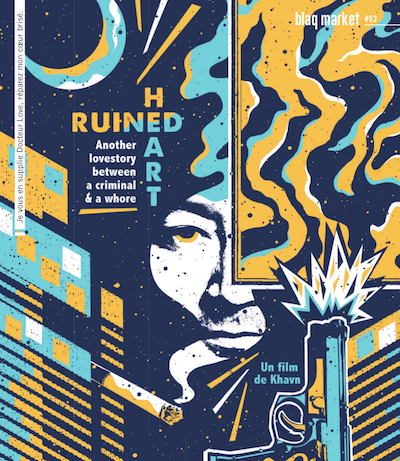 Synopsis : Somewhere in Manila, a crime boss rules with an iron fist. He uses religion and violence to stay in power. What superstition and razzle dazzle don’t accomplish, his goons do. To his most loyal henchman he gives the task of guarding his woman, who is headstrong and impulsive, and often gets into trouble. Before long, she falls in love with the henchman, and the star-crossed lovers decide to leave town. Fighting ensues. It is while on the run that they finally get to know each other for the first time… END_OF_DOCUMENT_TOKEN_TO_BE_REPLACED

Synopsis:
The story follows 3 members of a mental asylum, Tsumiji, Coco and Satoru, as they escape from the asylum, and into the real world. On the way, they find a vicar, who changes their out-view on life, by giving them a bible. Tsumiji takes interest and starts believing in god, while Coco believes the world began when she was born. While they look around town, they must walk ontop of the fences and walls to avoid the floor. They read in the bible that the world will end on the 10th July, so they roam around town attempting to find the perfect place for a picnic with the best vantage point to view the final event. END_OF_DOCUMENT_TOKEN_TO_BE_REPLACED

It is 1965. High-school student Takeyoshi Fujiwara Yasufumi Hayashi) hears “Pipeline” by the Ventures, and is mesmerized by their unique sound. With three friends, he forms a band called “The Rocking Horsemen.” A warm and comic glimpse into high-school and small-town life in Japan in the 60’s. END_OF_DOCUMENT_TOKEN_TO_BE_REPLACED

“What secrets lie deep in the buried forest? Veteran filmmaker Oguri Kohei, the director of such films as The Sting of Death and Sleeping Man, helms The Buried Forest (a.k.a. Umoregi), one of a select group of Japanese films entered in competition at the 2005 Cannes Film Festival. With a cinematic look seemingly pulled straight from yesteryear, the film kicks off by focusing on a high school girl named Machi (Karen). To break up the monotony of summer, Machi decides that she and her friends should have some fun and start telling each other stories. END_OF_DOCUMENT_TOKEN_TO_BE_REPLACED

My God, my God, why hast thou forsaken me?
On the same day of this word created from the depth of despair, the Christ passed away on the cross, A.D.2015, Virus has been spreading in many cities worldwide. It is a suicidal disease. The virus is infected by pictures. People, once infected, certainly come down with the disease, which leads to death. They have no way of fighting against the disease filled with fear and despair. The media calls the disease the Lemming Syndrome. END_OF_DOCUMENT_TOKEN_TO_BE_REPLACED

A haunting tale of destiny and life’s unpredictability: an elite bureaucrat, humbled by an incident which ruined his promising career, has a chance encounter with a glamorous hostess, heartbroken by her husband’s death. END_OF_DOCUMENT_TOKEN_TO_BE_REPLACED

Quote:
The story centers on a group of young people who travel back in time when they are in a movie theater just before closing time. They witness deaths during the closing days of Japan’s feudal times and on the battlefront in China before they are sent to Hiroshima just before the Aug. 6, 1945, atomic bombing of the city. END_OF_DOCUMENT_TOKEN_TO_BE_REPLACED