Quote:
When a woman and her bridegroom are found dead in a double suicide the day after their wedding, it is up to the detective to figure out what could possibly have motivated them. Carefully and systematically, he pieces together the inner lives of the two. END_OF_DOCUMENT_TOKEN_TO_BE_REPLACED

Quote:
[Toichiro Narushima’s] Time Within Memory (1973) was one of Takemitsu’s favorites films, but remains out of print. Film Critic Fritz Göttler considers this film to have been an ‘ideal collaboration…thoughtful and imaginative, a pure Takemitsu fantasy as antidote to films like The Ceremony or The Woman in the Dunes,’ while Klaus Volkmer laments its unavailability: One wants to see [Time Within Memory]—not possible. The early films from Shinoda…two films from Oshima have not been available for a long time…One can read about them—there are photos. END_OF_DOCUMENT_TOKEN_TO_BE_REPLACED

Director Satsuo Yamamoto wields his sarcastic scalpel in this message movie that takes jabs at the practices of the medical profession. Zaizen Goro may only be an assistant professor but he has already made a name for himself. His superior, however, does not approve of his attitude towards their profession, and is at odds over who to nominate as his successor. The selection of the new professor reveals a rich and complex political world inside Naniwa University. END_OF_DOCUMENT_TOKEN_TO_BE_REPLACED

The movie compiles footage taken by Ogawa Production for a period of more than ten years after the collective moved to Magino village. Unique to this film are fictional reenactments of the history of the village in the sections titled “The Tale of Horikiri Goddess” and “The Origins of Itsutsudomoe Shrine”. Ogawa combines all the techniques that were developed in his previous films to simultaneously express multiple layers of time–the temporality of rice growing and of human life, personal life histories, the history of the village, the time of the Gods, and new time created through theatrical reenactment–bring them into a unified whole. The faces of the Magino villagers appear in numerous roles–sometimes as individuals, sometimes as people who carry the history of the village in their memories, sometimes as storytellers reciting myths, and even as members of the crowd in the fictional sequences–transcending time and space. END_OF_DOCUMENT_TOKEN_TO_BE_REPLACED 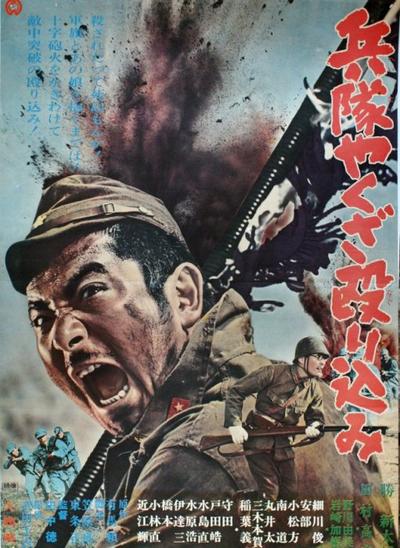 A young intellectual conscientious objector is forced to serve with the Japanese army in Manchuria. He joins with a dim-witted former gangster in an effort to desert by stealing a train. END_OF_DOCUMENT_TOKEN_TO_BE_REPLACED