A young Canadian nurse (Betsy) comes to the West Indies to care for Jessica, the wife of a plantation manager (Paul Holland). Jessica seems to be suffering from a kind of mental paralysis as a result of fever. When she falls in love with Paul, Betsy determines to cure Jessica even if she needs to use a voodoo ceremony, to give Paul what she thinks he wants. END_OF_DOCUMENT_TOKEN_TO_BE_REPLACED

Classic British mystery thriller starring Tom Conway as suave gumshoe, Norman
Conquest. After intercepting a secret message, Conquest meets foreign femme fatale,
Nadina Rodin (Eva Bartok), in room 605 of the Park Plaza hotel. When Conquest wakes up
in the room the next morning he is lying next to a corpse and the mysterious Rodin is
nowhere to be seen. Conquest is now the police’s number one murder suspect with
Inspector Williams (Sid James) shadowing his every move. In order to clear his name,
Conquest enlists the help of Pixie Everard (Joy Shelton), but things turn even uglier when
he discovers that the murder is connected to a stash of stolen diamonds. As gun-toting, END_OF_DOCUMENT_TOKEN_TO_BE_REPLACED 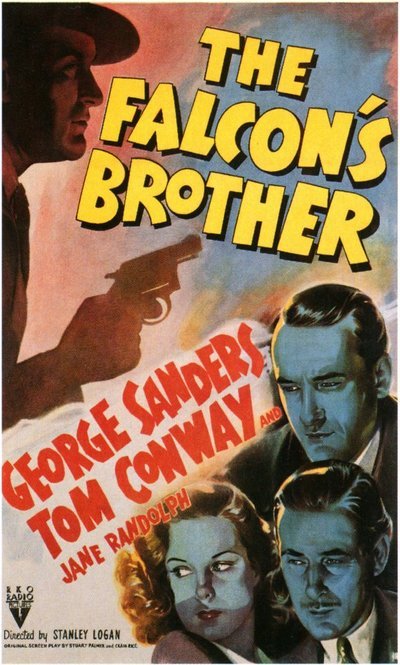 Quote:
Gay Lawrence, amateur detective known as The Falcon, learns that his brother Tom has been reported murdered on a ship arriving from South America. Gay pursues the murderers, despite the fact that he knows his brother is still alive. When he is disabled, his brother Tom takes over the case, investigating a fashion magazine involved in secret activities with German infiltrators. END_OF_DOCUMENT_TOKEN_TO_BE_REPLACED 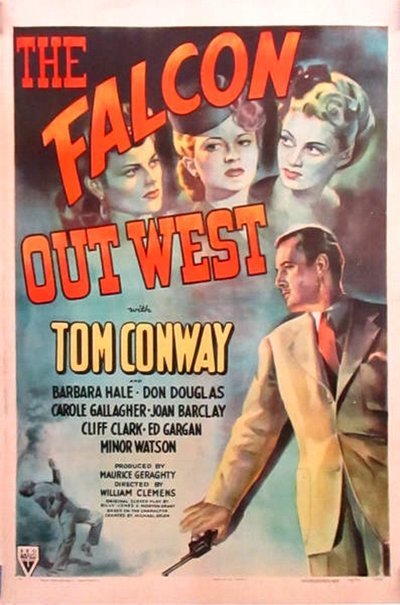 The murder of a wealthy, much-married rancher (Lyle Talbot) in a posh Manhattan nightclub is the catalyst for The Falcon Out West. Amateur sleuth Tom Lawrence (Tom Conway), aka The Falcon, deduces that the victim was killed with rattlesnake venom. END_OF_DOCUMENT_TOKEN_TO_BE_REPLACED 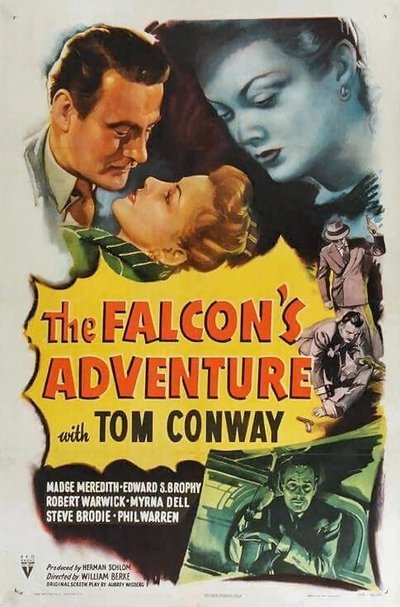 IMDB:
The Falcon rescues Louisa Braganza from kidnappers who want her father’s secret formula for making diamonds. Her father’s murder is pinned on the Falcon and, when he and she flee to Florida, another murder seems to confirm his guilt. END_OF_DOCUMENT_TOKEN_TO_BE_REPLACED

Plot:
A wealthy woman’s secretary, fearing that she will be blamed if her employer’s jewelry is stolen, hires the Falcon as guardian.

The Falcon is blamed when the jewels are stolen and murders ensue. END_OF_DOCUMENT_TOKEN_TO_BE_REPLACED

UCLA Film and Television Archive writes:
An amnesiac (Tom Conway), aided by a kindly taxi driver (Ann Rutherford), recovers his identity in a citywide search for clues, finding himself at the center of a murder intrigue involving theatrical writers and producers, a stolen play, jealousy and blackmail. It’s a heck of a way to reawaken to the world, but our hero reconstitutes both his identity and the truth in this taut thriller. END_OF_DOCUMENT_TOKEN_TO_BE_REPLACED