Plot Synopsis by Hal Erickson
Beyond This Place is a tame murder mystery based on a novel by A. J. Cronin. Van Johnson is cast as an American citizen whose British father has supposedly been dead for years. On a visit to London, Johnson discovers that his father is very much alive, serving a life sentence for murder. Johnson inaugurates his own investigation, retraces the trail of circumstantial evidence, and unearths the real culprit. Director Jack Cardiff was not happy with his work on Beyond This Place, possibly because he was obliged for box office purposes to use an American star in an essentially British story. The film was released in the US as Web of Evidence. END_OF_DOCUMENT_TOKEN_TO_BE_REPLACED

tvguide wrote:
Van Johnson plays a blind American writer who is renting an apartment on Baker Street while in London for the opening of his new play. After a row with his former fiancée (Vera Miles), he decamps to the local pub to drown his self-pity with a drink. There, his acute hearing picks up hushed snatches of conversation from the next booth. Convinced that a kidnap plot is in the offing, he rushes to the police, who are polite but refuse to believe him. However, Johnson knows what he heard is true and engages the help of Vera and Cecil Parker, his secretary, to find the kidnappers and save the unknown victim. END_OF_DOCUMENT_TOKEN_TO_BE_REPLACED

SYNOPSIS:
Ethan Edwards, returned from the Civil War to the Texas ranch of his brother, hopes to find a home with his family and to be near the woman he obviously but secretly loves. But a Comanche raid destroys these plans, and Ethan sets out, along with his 1/8 Indian nephew Martin, on a years-long journey to find the niece kidnapped by the Indians under Chief Scar. But as the quest goes on, Martin begins to realize that his uncle’s hatred for the Indians is beginning to spill over onto his now-assimilated niece. Martin becomes uncertain whether Ethan plans to rescue Debbie… or kill her. END_OF_DOCUMENT_TOKEN_TO_BE_REPLACED 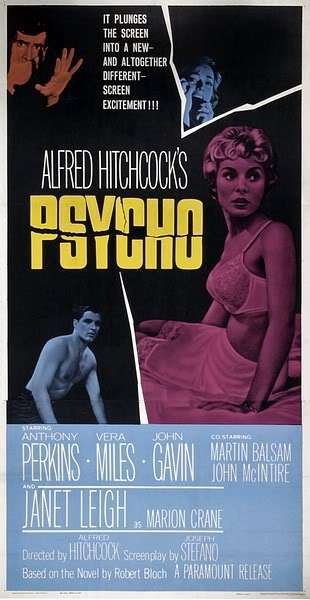 from AllMovie
In 1960, Alfred Hitchcock was already famous as the screen’s master of suspense (and perhaps the best-known film director in the world) when he released Psycho and forever changed the shape and tone of the screen thriller. From its first scene, in which an unmarried couple balances pleasure and guilt in a lunchtime liaison in a cheap hotel (hardly a common moment in a major studio film in 1960), Psycho announced that it was taking the audience to places it had never been before, and on that score what followed would hardly disappoint. Marion Crane (Janet Leigh) is unhappy in her job at a Phoenix, Arizona real estate office and frustrated in her romance with hardware store manager Sam Loomis (John Gavin). One afternoon, Marion is given $40,000 in cash to be deposited in the bank. Minutes later, impulse has taken over and Marion takes off with the cash, hoping to leave Phoenix for good and start a new life with her purloined nest egg. 36 hours later, paranoia and exhaustion have started to set in, and Marion decides to stop for the night at the Bates Motel, where nervous but personable innkeeper Norman Bates (Anthony Perkins) cheerfully mentions that she’s the first guest in weeks, before he regales her with curious stories about his mother. There’s hardly a film fan alive who doesn’t know what happens next, but while the shower scene is justifiably the film’s most famous sequence, there are dozens of memorable bits throughout this film. END_OF_DOCUMENT_TOKEN_TO_BE_REPLACED