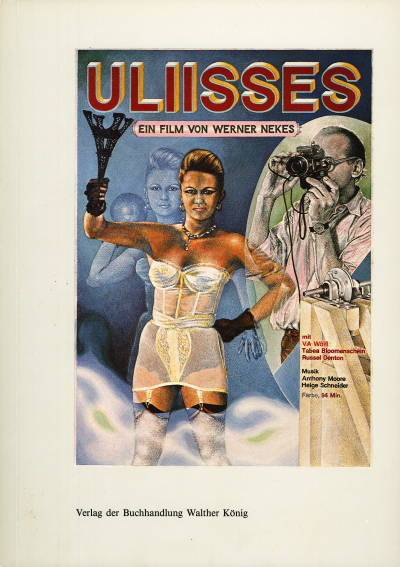 Quote:
The film is a Homeric journey through the history of cinema. Its theme is based on the mythological Odysseus of Homer, the Ulysses of James Joyce, and the synthetic figure, Telemach/Phil, from the 24-hour-long piece «The Warp,» by Neil Oram. Werner Nekes combines these three figures, and he shows their stories within the history of «lighterature,» writing with light = film. His central theme, however, is visual language in of itself: Odysseus/Bloom is transformed into Uli the Photographer, Penelope/Molly into his model, and Telemach/Stephen into Phil, who begins his «Telemachia». The connecting of their three lives occurs during the course of a single day, in September of 1980, in Germany’s industrial Ruhrgebiet region, preceding the elections in the Federal Republic. END_OF_DOCUMENT_TOKEN_TO_BE_REPLACED

Quote:
“…What sounds rather bookish and intimidating, in fact unfolds an enormous sensual stimulus on screen. In more than 20 sequences, based in part on work by Stifter and Camus, Hamburg’s experimental film director and a number of students from Braunschweig and Göttingen demonstrate a higher school of hearing and seeing. With manipulations of sight and sound, which are at times highly complex and mathematically precise, he shows the tension between optical and acoustic elements, inventing ever new combinations from which an abstract poetry issues forth. Nekes works with single frame mechanism and multiple copying of the images, thus defamiliarizing the sound at the same time. The title of the film pertains to Jonathan Swift’s ‘Gulliver’s Travels’. Lagado is the name of the academy in which scientists of the most diverse disciplines work at strange projects.” – Hans C. Blumenberg END_OF_DOCUMENT_TOKEN_TO_BE_REPLACED

Quote:
“Diwan, a lyric anthology, an outdoor movie with people. With people living in the surrounding precious and very beautifully photographed nature, are neither more nor less than one part of it. What Nekes manages there with landscape, as a cunning and quote many fine artist in a medium that runs in time, as he defeated the time changed, by themselves for change of scenery uses, as it interferes with the laws of chronology through the rewind ability of the camera or destroyed, which is a compelling and highly aesthetic experimental company.” END_OF_DOCUMENT_TOKEN_TO_BE_REPLACED

Quote:
“The title refers to Japanese landscape painting on rolls. Furthermore it indicates the film’s theme, the balance of colors (blurred tones of blue, green and grey) and the type of montage that gives priority to continuity of development rather than to disruption and contrast. This continuity is achieved by dissolvings and double exposures and by extremely long pans. The rhythm accelerates: a meditation on landscape, which unfolds before the eye or is visually paced out, gives way to fluidity and pure motion, to a feeling of dizziness, the result of two contrasting camera movements. END_OF_DOCUMENT_TOKEN_TO_BE_REPLACED

Werner Nekes: a short comment on the aesthetic organisation of T-wo-men: The orthography of the title refers to the ‘horizontal readability’ of film. The tiniest film information is an amalgamation of two individual images in the mind of the recipient. Cader A joins up with Cader B to achieve the thaumatropic effect, to a form a ‘cine’, the smallest transmission element of cinematic information. END_OF_DOCUMENT_TOKEN_TO_BE_REPLACED

Quote:
“A long setting of a basement window to the street. Slower and stopping down the street brothers in Hamburg (where Nekes lives). A stand of the belly of a girl on her legs and her dress. Then, vagina and penis, as they are complementary. The 60-minute film is silent. The canvas, as in previous Nekes movies, to the canvas of the painter. It does not look in an imaginary space, one sees an area that is divided divided, with each cut and replaced by a new canvas. In particular, an impression: strong, cool calculation. It stands there like a block. Immovable. The picture is so much that it is beyond the linguistically appropriate formulation. One must see that.” – Werner Kließ END_OF_DOCUMENT_TOKEN_TO_BE_REPLACED

Quote:
Makimono is an Asian roll painting depicting a landscape. The subject of the film is the language of film itself, its mutability and its influence on the viewer’s vision and thinking. While the film gradually progresses the viewer is gently invited to reflect on the development of the film in its expressive potential. END_OF_DOCUMENT_TOKEN_TO_BE_REPLACED