One of the best serials ever made, Spy Smasher has managed to find favor even among non-serial aficionados. Like his fellow masked avenger, Batman, Spy Smasher possessed no super-human powers but was a mere mortal of flesh and blood.

In brief, Spy Smasher, alias Alan Armstrong (Kane Richmond, and his twin brother Jack (also Richmond) pursue a nefarious German agent known only as The Mask (Hans Schumm). Witney and screenwriters Ronald Davidson, Norman S. Hall, Joseph Poland, William Lively and Joseph O’Donnell imbued their hero with a dark uniform very similar to the one he wore in the comics, but added a fancy belt decorated with a large “V” for “Victory” and the morse code symbol for the letter, three dots and a dash. The coup de grace, so to speak, was Mort Glickman’s signature score adapted from Beethoven’s Fifth Symphony. END_OF_DOCUMENT_TOKEN_TO_BE_REPLACED

Quote:
Reviewing the serial it is still one of Republic’s best efforts, made at the peak of their creativity. Jim Harmon and Donald Glut have referred to “Dick Tracy vs. Crime Inc.” as “The Best of Dick Tracy” since a lot of the action and cliffhanger footage is made up from the three previous serials. In essence, Republic took what they considered the most exciting scenes from earlier serials, and strung them together with a strong storyline. Unlike most of the post war serials that were constructed out of earlier serials, this one is not hampered by all of the reused footage. END_OF_DOCUMENT_TOKEN_TO_BE_REPLACED 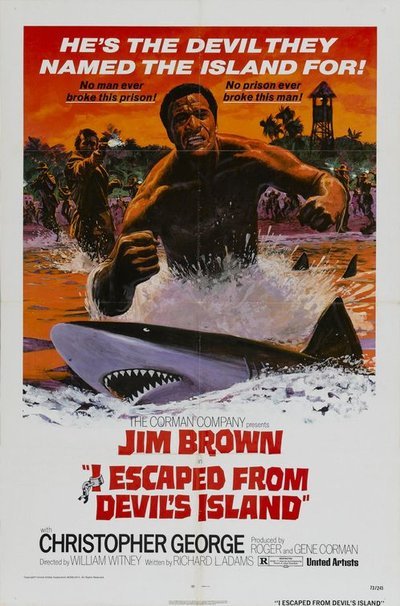 In 1916, A group of prisoners plot their escape from the notorious fortress located in French Guiana. END_OF_DOCUMENT_TOKEN_TO_BE_REPLACED