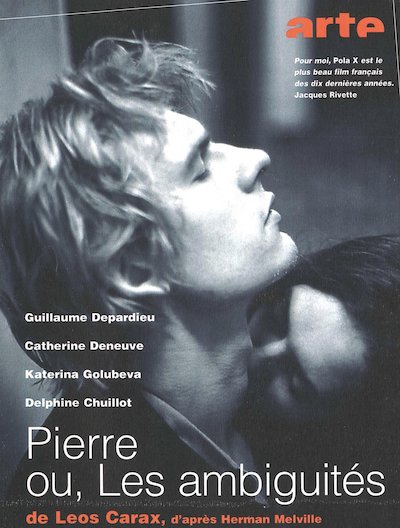 Synopsis:
Pierre, a young man of privilege, whose anonymously-published novel is a hit and who’s about to marry his blond cousin, Lucie, abandons all when a dark-haired vagrant tells him her secret late one night in the woods: that she is Isabelle, his sister, abandoned by their father. Pierre breaks off with Lucie and his doting mother, heading for Paris with Isabelle, intent on knowing the dark side of human nature. He begins a novel, sending chapters under a pseudonym to his publisher; his relationship with Isabelle moves beyond the fraternal; and, in winter, the frail Lucie comes to live with them. Family jealousies mount, and Pierre may have discovered despair instead of the truth. END_OF_DOCUMENT_TOKEN_TO_BE_REPLACED

Quote:
In Kaliningrad two Lithuanian boys meet two Russian girls. They have difficulties in finding places where they can sleep together. But this is the only problem they do solve. All four justly feel miserable because their lives are meaningless (the recurrent dull and poorly kept house façads could well be taken as a comparative symbol). In addition, everyone is so absorbed by his or her own distress and hardly capable of bothering about the anguish of the others. The three days end with a pervasive lack of contact. END_OF_DOCUMENT_TOKEN_TO_BE_REPLACED

Synopsis:
Serious boffin Ivan (Fedor Lavrov) arrives in unnamed town from Novosibirsk to take up a post at institute run by Sergey Sergeyevich (Pavel Lubimtsev) and is immediately put in charge of Unit 7 where the particle flux experiments are taking place. Maximum reading a subject can produce is 977, hence title, and fetching waif Rita (Klavdia Korshunova) does just that, but seems to disappear mysteriously from the sealed observation rooms every time the experiment is conducted. Overtones of Tarkovsky’s “Solaris” and “Stalker” are bolstered by hints, so subtle those just reading the subtitles won’t get them, that action takes place in the ’70s. END_OF_DOCUMENT_TOKEN_TO_BE_REPLACED